Colm Tóibín: The same-sex marriage referendum and the embrace of love 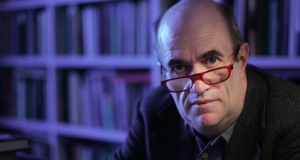 Colm Toibin: ‘We seek to embrace marriage and strengthen the idea of the family and our involvement in it. We seek to enhance the institution of marriage. We want to make the same vows as others do, for the same reasons.’ Photograph: Bryan O’Brien

In 1996, after I had published my novel The Story of the Night, which is in part an account of the love between two men, I received a private letter from one of the most powerful men in Ireland, someone who had served in government, and was then and later a figure of immense influence in public life. I had never met this man, and I was surprised by the tone of the letter that was personal but also engaged, almost urgent. He simply said that it had never occurred to him that two men could fall in love in the way straight people do, that a man could wait for phone calls and messages from the loved one who was also a man, or that the two men could begin to long for and enjoy each other’s company and thus become happy in the warm glow of love. He had thought being gay was merely about sex, that it was a merely sexual orientation, that its embrace did not include what the novelist Kate O’Brien called “the embrace of love”.

A few weeks later I met a prominent Irish feminist, someone had been at the forefront of the women’s movement, and she too expressed surprise at the intensity of the relationship between the two men in the book. “They sound like straight people,” she said. I told her that that was because they were like straight people, that they wanted intimacy and love, they wanted each other, they wanted ease in their domestic and family lives. They also wanted their relationship to be publicly recognised. They wanted to move out of the shadows and into the light.

I was concerned that these two educated, decent and liberal people could know so little about homosexuality. What I viewed as normal, they viewed as strange. What I viewed as an essential part of my life, they viewed as something they knew nothing about. It struck me that they must, along the way, have worked with gay people; they probably had neighbours who were gay, they may have even had family who were gay, but in Ireland until recently gay people had a way of living in the shadows, not declaring ourselves. We had a sort of secret city - bars and discoes, bath houses, websites, places of assignation – and some of us had become skilled at moving between these places as though we were invisible. Invisibility became part of a survival mechanism.

The downside of that was that people simply did not know about us, and more importantly, did not know that our way of loving has precisely the same contours and textures as anyone else’s, the same fears and intensities, the same needs and comforts. One of those needs includes the need for the same rituals and the same constitutional protection as other people have and enjoy.

Other communities who have been oppressed – Jewish people, say, or Catholics in Northern Ireland – have every opportunity to work out the implications of their oppression in their early lives. They hear the stories; they have the books around them. As gay people, on the other hand, we grow up alone; there is no history. There are no ballads about the wrongs of the gay past, the gay martyrs are mostly forgotten. It is as though, in Adrienne Rich’s phrase, if you were gay, “you looked into the mirror and saw nothing”. Thus the discovery of a history and a tradition and a sense of heritage must be done by each individual, as though alone, as part of the road to freedom, or at least knowledge.

This is maybe why this same-sex marriage referendum campaign, the one we are going through now, has been so liberating for gay people and for our friends and families. It has allowed us to set out publicly and communally who we are and how we wish to be treated in our country in the future. It has allowed us to have a public debate with our entire nation about our need for recognition and equality. It has allowed us to speak openly about the terms of our love. The level of support has been heartening, encouraging, inspiring. After 2015, it is unlikely that there will be many people in Ireland who will not know about us, have a sense of how ordinary our desires are. Or see how normal and middle-of-the-road most of us are.

As of now, we have, it seems, no wish to question marriage as an institution, or undermine the centrality of the family under the Irish Constitution; instead we seek to embrace marriage and strengthen the idea of the family and our involvement in it. We seek to enhance the institution of marriage. We want to make the same vows as others do, for the same reasons. We want to live in the ease and with the protection which marriage offers. It is not hard to see how much happiness and relief this will bring to us and to our families; it is, however, hard also to see how this will adversely affect other people who already enjoy the benefits of marriage, the majority of whom will, we hope, be generous enough to want to allow us to share what they already have. What we want is strangely simple: we want to be included. Winning the right to marry on May 22nd will lift a great weight from us and those who wish us well; it will be a liberation for us, and a milestone in the history of increasing tolerance in Ireland.

In 1941 the Irish novelist Kate O’Brien published The Land of Spices, which is one of her best novels, and one of the greatest novel ever written about the religious life. Towards the end of the third chapter, the young Helen Archer, who will later become a Reverend Mother, comes home unexpectedly from school in Brussels and saw her father and another man “in the embrace of love”.

This single image, the only reference to homosexuality in the book, is all the more explosive and dynamic because of that. For those four words “the embrace of love”, the book was banned by the Irish Censorship Board.

They are the very words now that, in this campaign, animate us and nourish us. Because we are not talking about abstract rights, abstract discrimination. We are not even talking about sexuality. Rather, we are talking about love, about the embrace of love, about how our love equals the love of our fellow citizens who are heterosexual, and how right and necessary it seems to us, indeed how much of an imperative, that our love should be ritualised and copper-fastened and celebrated in marriage in the same way as everybody else’s love. If there is someone who believes that our love is of a lesser order than theirs, how can they know this? Who have they asked?

Kate O’Brien, who was a great stylist, was also a writer with a keen, brittle mind and a sharp eye. A tremendous maker of phrases, she mixed irony and sympathy in equal measure. As we come up to voting day, it seems fitting to invoke her great old spirit. Helen’s father and the man in The Land of Spices were not merely embracing, but they were “in the embrace of love”. That is what the girl saw, and it was perhaps that idea which so disturbed the Censorship Board, the idea that there was someone not willing to caricature sexual relations between men, but rather offer them dignity and suggestiveness, and then bring in the word, the word that should dominate out thinking and our argument over the next week. The word is love, our love. That is what matters to us most now as equality comes close.

This article is an abridged version of a public talk given by Colm Tóibín in Trinity College Dublin focusing on same-sex relationships and literature entitled ‘The Embrace of Love: Being Gay in Ireland Now’ on Thursday, May 14th, 2015.