Can Joe Biden unite America? The answer is Yes

The president-elect can enact policies that manifestly help working Americans 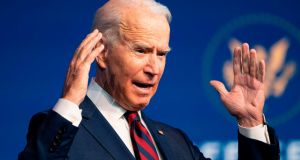 US president-elect Joe Biden: his campaign pitch, ‘heartland Scranton versus rich Wall Street’, will continue to attract Americans who voted for Trump but realise he was only out for himself. Photograph: Alex Edelman/AFP via Getty Images

Joe Biden, having won the US presidential popular vote by more than seven million and the electoral college by 306 to 232, will become president on January 20th. The pressing question now is whether president Biden will be able to deliver on his promise to end the divisions in America. Can he actually unite his 81 million supporters with at least some of the 74 million who voted for Donald Trump?

The answer is yes, provided Biden enacts policies that manifestly benefit working Americans, especially in the midwest, where the economy has been devastated by years of globalisation and neglect by both parties. It will not be easy, however, with only a quarter of Republicans in recent polls believing that Biden’s victory was legitimate.

Despite the nasty, divisive lies spewing from Donald Trump, most Americans, regardless of political party, want the same things: good, secure jobs that enable them to support a family, affordable healthcare and education, social security and Medicare, clean air and water, taxes on the ultra-rich, and personal security. Democrats fight for these goals consistently, and Trump attracted widespread support by pretending to support some of them. However, Republicans in the Senate and the House, funded by billionaires such as the Koch brothers, consistently block legislation to achieve these reforms. For the past four years, Trump has been the celebrity front man for these rich interests, just as the Bushes were before him and Ronald Reagan was in the 1980s, when he tore massive holes in the social safety net.

Republican strategists created not one big lie, but Big Lies, aided and abetted by unregulated social media and a snake oil conman

Robert Reich estimates that if America’s distribution of income had remained the same from 1975 as it was in the three decades following the second World War, the bottom 90 per cent of Americans would now be $47 trillion richer. In recent elections that $47 trillion heist has fuelled much of the middle-class resentment and “populism” that ironically votes for the Republican leadership responsible for the rip-off.

In the last four years alone, the Republican White House and senate undermined affordable healthcare, reduced taxes on the rich by $2 trillion, opposed minimum wages of $15 per hour, gutted environmental laws, and sought to privatise for profit public goods, from healthcare to social security to education and public housing.

So why do millions of Americans vote for Republicans generally opposed to their economic interests? Many books have been written about identity politics, but the simple truth is that Republican strategists created not one big lie, but Big Lies, aided and abetted by unregulated social media and a snake oil conman.

Their Big Lies scare millions of Americans, portraying Democrats as godless socialists who will take away your hard-earned money, weaken police protections, undermine Christian religion, regulate you out of business and open up the borders to aliens who will steal your jobs. These scare tactics build on Richard Nixon’s infamous southern strategy, which stirred up racial fears amongst white southerners.

In contrast with previous decades, when there was some semblance of a common political and media discourse, Republican leaders successfully avail of largely unregulated social media platforms and algorithms to create parallel universes disconnected from truth and reality. These are reinforced by Lachlan Murdoch’s “media” and thousands of local radio and TV stations, plus regional newspapers bought by wealthy Republicans.

What can president-elect Biden and the Democrats do to win back some of those who voted for Trump and who are not white racists opposed to racial and sexual equality? How does Biden reach folks manipulated by a cyber-curtain that has descended across America and the world, promoting falsehoods, plutocracy and oligarchy?

For starters, Biden’s campaign pitch, “heartland Scranton versus rich Wall Street”, will continue to attract Americans who voted for Trump but realise he was only out for himself.

Biden will also help heal divisions because of his palpable decency, working-class Irish-American background and personal faith, which make him “relatable” to voters, especially to non-college educated white Americans in the crucial “blue wall” states.

Furthermore, Biden’s “build back better” plans will offset the impact of globalisation and technology on lower-skilled working people with a massive trillion-dollar infrastructure investment plan for new jobs. This includes reforming the financial and fiscal system, which is rigged against working people, and creating millions of new jobs, including union jobs, in building broadband and infrastructure to replace America’s crumbling infrastructure. Just as important are affordable healthcare and education. For example, congressman Conor Lamb in Pittsburgh and senator Jeanne Shaheen in New Hampshire adopted these kitchen-table policies and won in battleground states.

Biden’s “made in America” plan to revitalise manufacturing and industrial activity will resonate with ordinary Americans whether they voted for him or for Trump. With an electoral college and senate where geography is destiny, Biden recently said, “We have got to rebuild the middle class, especially in rural America.”

President Biden can sign these orders on January 21st, sending a strong message that he is on the side of working Americans, whatever their race, party or creed

Many Democrat and Republican voters are united on the need to rein in free-trade agreements, including standing up to China, which has exploited unfair trade rules for many years. The best way that Biden can fight for democracy around the world is to prove it works for everyone in America.

President Biden can also straddle the political divide by joining the European Union in reforming US antitrust legislation to rein in Big Tech (which was basically given a free pass by the Obama administration). As Rana Foroohar has noted in the Financial Times, “The perception that the Democrats sold out to corporate interests is one of the reasons we got Mr Trump.”

Finally, if Democrats do not win the two highly contested Georgia senate seats on January 5th, will a senate Republican majority block every legislative proposal from president Biden, seeking to portray him as a do-nothing president? If that were to happen, Biden does have another option. Senator Elizabeth Warren has outlined a series of changes to improve lives of Americans that can be achieved by presidential executive order. They include cancelling billions of dollars in student loan debt, lowering prescription drug prices, raising the minimum wage for federal contractors to $15 per hour, and enforcing anti-monopoly protections.

President Biden can sign these orders on January 21st, sending a strong message that he is on the side of working Americans, whatever their race, party or creed. In so doing, he will attract more support from people who have felt forgotten by the Democratic party and he will differentiate himself from Donald Trump, whose one major policy achievement in four years was a $2 trillion tax break for the very rich, his real bosses in the Republican party.

Ted Smyth, president of the advisory board of Glucksman Ireland House at NYU, is a member of the Irish Americans for Biden committee