Emmanuel Macron and Marine Le Pen are both in the race to become president of France, but what do they stand for, and what could it mean for Ireland? Lara Marlowe reports from Paris. 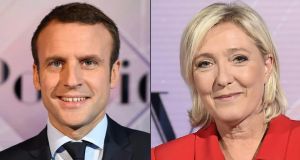 Emmanuel Macron and Marine Le Pen, who face a run-off election on May 7th for the presidency of France. Photograph: Miguel Medina/AFP/Getty Images

So who cops the blame for this one? If those ghastly metropolitan liberals – with their snide, superior ways and smothering of the plain man’s right to fake news – stand accused of causing the stampede towards Trump-style misogynists, racists and isolationists, who is to blame for the rise of the unapologetically centrist Emmanuel Macron?

In case you’ve been away, the news is that the chosen candidate of Trump, Putin, Farage et al, Marine Le Pen, did not win. And Macron is neither left nor right. Apparently.

Even so, after Sunday, France is being portrayed as an echo of the United States, with electoral maps showing vast, rural spreads of Le Pen-supporting Forgottens versus solid clumps of Macron in the big cities. Macron is not that easily bracketed. He won the majority in places such as Auvergne-Rhone-Alpes, Brittany, Ile-de-France and Pays de Loire.

If we look only at Le Pen, there is certainly a US echo in her rhetoric of fear and xenophobia.

According to one poll, voters overwhelmingly cited immigration (69 per cent), terrorism (46 per cent) and insecurity (42 per cent), as their reasons for supporting her. Only 10 per cent cited social inequality, which at least dilutes the theory of the rural Forgottens.

So who voted for Macron? Of six age categories, only one group failed to give him more than 20 per cent. That was the 18-24-year-olds, 30 per cent of whom plumped for the hard-left, hologram merchant, Jean-Luc Mélenchon, given to citing de Gaulle, Chavez, Castro and lyric poetry. All very amusing and romantic. But more than one in five of that age group gave their precious vote to Le Pen.

The over-70s did nothing radical, other than to vote, nine out of 10, to reject Le Pen's siren call, the most of any age group

Of all the age groups, only one remained almost totally impervious to the Le Pen rhetoric. The over-70s did nothing radical, other than to vote, nine out of 10, to reject Le Pen's siren call, the most of any age group.

Is this the defining difference between the US and France? People who have lived the consequences of fascism are obviously going to be ultra-sensitive to any modern manifestations of it, or to efforts – such as Le Pen’s – to obliterate any national responsibility for French collaboration in the second World War. Normandy swung mostly for Macron for several reasons no doubt, but the many war cemeteries located there may also have something to do with it.Yet, on Sunday night, when one party leader after another weighed in with valuable endorsements for the anti-Le Pen candidate, Mélenchon, the young people’s choice, failed to add his. His ideological purity rendered him unable to endorse anyone, thus opening the way, possibly, for a potential President Le Pen. His prerogative, of course, but none the less eyebrow-raising.

The various agendas at work in France and on the British side of the channel are fascinating to behold. Of course, a Macron failure to make any alignment work could lead to a National Front sweep in five years’ time. But who in their right mind would work towards that ?

Anyone observing the verbal acrobatics among certain elements of the British media might pause and wonder. Their fear of Macron is understandable, since if elected he will be a mighty hurdle between the European Union 27 and Theresa May’s leap towards that mythical prize, “the Best Possible Deal”.

But all those British headlines virtually cheerleading Le Pen, suggested she is “storming into the final straight” – when even her own campaign directors were disappointed in her showing – go a little further. After all, her vote was no surprise. The polls got it bang on. The woman has just two MPs in the French parliament. What makes her the catnip to their keyboards?

The answer is that for the rabidly pro-Brexit media, everything European is seen through the Brexit prism and their desperate need to defend that stance.

Le Pen has made electoral headway, yes. But she is not exactly a 24-year-old shooting star, more a career politician leading a 45-year-old party founded by her father, funding much of its activities with income from the EU whose principles she roundly rejects (and is currently under investigation over alleged misappropriation of some of those EU funds), yet somehow manages to wear the coveted “outsider” label, in this two-horse race.

Meanwhile, Macron, the former investment banker turned economics minister who turned against the system he witnessed up close, is labelled the consummate insider. Yet he has never run for office before, severed any previous party associations and risked everything to found his own movement – now with 200,000 signed-up members, all in a single year. He goes into the June parliamentary elections with no incumbent candidates, just a few thousand brand-new recruits scouted online.

Not the least of his charms is that he has a spouse who is 25 years older than him. Do you think it’ll catch on?

1 Covid-19: Government set to reject advice and approve reopening of gastropubs and restaurants
2 Saoirse Ronan and Daniel Day-Lewis on ‘greatest 21st-century actors’ list
3 Admission of mistake in Oxford vaccine dose raises doubts over reliability
4 Helen McEntee holds up well for someone with barely a leg to stand on
5 Restaurants and gastropubs to reopen in December under Government plan
Real news has value SUBSCRIBE