Nicholas Boyle: Britain’s failure to face up to the loss of its empire made Brexit all but inevitable 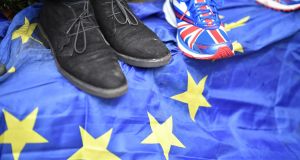 People get set for Brexit on January 31st: What was Brexit after all but a schoolboy spat between Boris Johnson and David Cameron, two rival Oxford-educated Old Etonians, and Nigel Farage? Photograph: Jeff J Mitchell/Getty

Brexit Day has come and gone and still we do not know what Brexit means. Boris Johnson, as we know, likes to see himself as a second Winston Churchill – a former maverick called on by his country to rescue it from an existential crisis. He prefers, however, not to remind us that the crisis in question, unlike that which faced Churchill, was largely of his own making and was engineered by him for his personal advantage. Now, at the cost to his country of historic and permanent disruption, he has acquired the premiership. What will he do with it? Churchill and Britain knew why he was prime minister; he had to win the war. But neither Mr Johnson (apparently) nor Britain (certainly) knows what is the Brexit, on the promise of which, he won the election. Which is presumably why he has instructed his government that from now on there is to be no more talk of Brexit. Brexit is to be regarded as “done” for, whatever it was, it has served its purpose.

Yet even the manufacturers of Sunderland, the most prominent of Britain’s Leave-voting cities, say they do not know what Friday means for them, that Saturday is the beginning of Brexit not the end. Any obvious changes are postponed to December 31st, the real Brexit Day, and even then much will be left in suspense, subject to future, and probably interminable, rounds of “further talks”. That in turn means a possibly indefinite continuation within Britain itself of the highly emotional disagreements provoked by the referendum.

1 Emily Maitlis replaced as Newsnight episode host following Cummings monologue
2 Trump threatens to close down social media companies after Twitter fact-check
3 Bake-off: Matt Damon bids farewell to bakery as he prepares to leave Ireland
4 Miriam Lord: Taoiseach is trapped in a Zoom session from hell
5 Coronavirus: Further 17 deaths reported along with 73 new cases
6 Elon Musk rocket launch postponed due to bad weather
7 Miriam Lord: Leo’s Phoenix pecs just a storm in a bag of cans
8 Cruise ship study shows prevalence of ‘silent’ Covid-19 higher than thought
9 Electric cars covering more kilometres than petrol models
10 Leaving Cert: Teachers advised to ‘destroy’ documents relating to students’ grades
11 Many Leaving Cert students likely to defer college places this year, says report
12 André Leon Talley: How Anna Wintour threw her right-hand man ‘under the bus’
13 Ancient Roman mosaic floor discovered under vines in Italy
14 Men suspected of planning murder of member of criminal gang arrested
15 What do you do when you meet a bear on a walk? Copy this 12-year-old
16 Second-hand clothes firm used as front for drug distribution network, court told
17 Tempted by a weeknight barbecue? Here’s how the pros turbocharge their grilling
18 Dig for remains of Red Hugh O’Donnell finds skull and coffins
19 Proposed ban on Israeli goods a sticking point in government talks
20 Michael McDowell: We will laugh at the puritanism of the two metre advice
21 Ricky Tomlinson’s criminal convictions to be re-examined
22 When did Johnson become so dependent on Cummings? Was he always this weak?
23 US passes 100,000 Covid-19 deaths as country begins to reopen
24 ‘My husband now says our life could be better without children’
25 John Crown: Only true funding reform can fix hospital problems
26 Do we really want children taught by teachers dressed in visors and face masks?
27 Cash haul of €700,000 linked to veteran trafficker Mitchell
28 A ‘really subversive idea’: Most people are pretty decent
29 Officers told to prepare to deploy to DRC as fears grow for Irish contingent
30 Some Irish backpackers in Australia say they feel vulnerable and desperate
31 Archaeologists are ‘quite sure’ they have found Red Hugh O’Donnell’s burial place
32 Tony Slattery: Something happened when I was very young. A priest. I was eight
33 Michael Smurfit: total lockdown of economies a ‘serious mistake’
34 Covid-19: How the debate around reducing the two-metre rule began
35 ‘Who’s in charge?’ TDs warn time for Government, not health advisers to decide
36 ‘It would be such a shame if Ireland were to lose its beautiful native tongue’
37 Sil Fox tells of ‘months of hell’ as he is cleared of sex assault on woman in bar
38 TikTok investigates ‘alarmingly immature’ farm stunt videos
39 Prof Luke O’Neill: ‘It’s definitely beatable, Covid-19’
40 Johnson wriggles out of Cummings questions with plea to ‘move on’
Real news has value SUBSCRIBE