Brexit has emboldened casual anti-Englishness among the Irish

Finn McRedmond: Nastier impulses of nationalism are increasing in scale 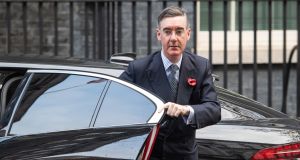 The average Brexit voter is far more interested in the state of public services and the NHS, unlike the Brexit pursued by Jacob Rees-Mogg, laden with lofty gestures to Britannia unchained. Photograph: Dominic Lipinski/PA Wire

Since Brexit established itself as a mainstay of political discourse, we have been treated to all manner of tedious diplomatic mudslinging. Barnier versus Boris; Dublin versus London; England versus Scotland.

In one strain of the British press, a consistent narrative emerged. Bruce Arnold wrote in the Telegraph that “little Ireland’s ridiculous leaders” were bought by Brussels; Ross Clark claimed in the Spectator that Leo Varadkar was “hung out to dry by the EU”; while a Sun editorial suggested his attempts to “wreck Brexit” had been a “suicidal failure of statesmanship”.

11 Maureen Gaffney: The land of the mother and baby homes

12 Covid-19: Over 2,000 student nurses to leave placements so trainers can return to wards

13 How did Ireland jump from low Covid base to world’s highest infection rate?

19 The only four skincare products you need

20 Trump prepares to leave for Florida before Biden inauguration

24 Q&A: Covid-19 new variants in Ireland - everything you need to know

25 Brexit red tape: ‘If nothing changes, Ireland will be closed’

26 David McWilliams: What a Doc Martens boot can teach us about the wealth gap

27 You could fill a book with doubleplusungood uses of ‘Orwellian’

30 No, you can’t use the bathroom, Jared and Ivanka tell their Secret Service agents

32 Church ‘more complicit than most’ in mother & baby scandal - McAleese

33 What is Ireland’s plan for vaccinating people against Covid-19?