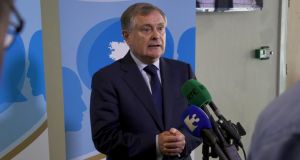 Labour and Fine Gael have worked hard to bring this country back from economic ruin, says Minister. Photograph: Sara Freund

Political instability and economic instability go hand in hand. As events in Greece have proven, they are a lethal cocktail. Our economic recovery has been hard won and just at the point when our efforts are paying dividends it is critical we don’t put the recovery at risk.

Consider the position inherited by the Labour/Fine Gael Government from Fianna Fáil and the Greens. Unable to fund itself Ireland was forced cap in hand to the troika to pay for our public services.

The Fianna Fáil government had collapsed in farce. Micheál Martin deserted the sinking ship. Following the 2011 election, Labour and Fine Gael, the two largest parties, formed a Government of national unity to bring Ireland back from the brink.

Some have argued that Labour should have stayed out of government.

That might have been good for Labour, but it would have been ruinous for Ireland. A Fine Gael minority government would not have been able to do what was required to rescue the country.

The turnaround over the last five years has been remarkable.

Our first objective – to get out of the bailout – has been achieved. We have renegotiated the Fianna Fáil programme. Our international reputation has been restored. We now borrow at historically low rates. Our economy is the fastest growing in the European Union.

Critically from a Labour perspective, we are creating jobs – 120,000 in the past three years. Getting here has been difficult but our strategy is working.

Our progress has not just been economic. We are a more liberal and open society too. Issues ducked by previous governments have been dealt with. Importantly, the X case has been legislated for and we all remember the feel-good spirit generated by the marriage equality referendum.

My own view is clear. Our job of work isn’t done. Anybody who believes that the economic recovery is locked down is mistaken. As recent events in China prove, economic stability cannot be taken for granted. Political events too can drive economies backward. We will need steady hands on the tiller for the next five years.

The best way to deliver that is a voting pact at the next election between Labour and Fine Gael, with each party asking its supporters to transfer to the other.

But I also want a Labour mandate for Labour policies in that government.

While our manifesto will indicate scope for tax relief aimed at low and middle income workers, we will also argue that a majority of the recovery dividend should be invested in services – schools, healthcare and childcare. We will be able to do so only provided we don’t put the recovery at risk.

Labour will seek a mandate too for the replacement of the eighth amendment to the Constitution. We also want to repeal the constitutional provision about women working in the home and promote secular education too.

The greater Labour’s mandate is the stronger our case will be.

But while we will be asking voters to support Labour candidates and Labour policies, we will commit to forming a stable government with Fine Gael.

Already it is clear that only Labour will be offering these kind of liberal left choices to the people with the determination to deliver.

The Opposition is a mess. The two main parties won’t serve together in government – an economic relief. Sinn Féin refuses to countenance the responsibility of government unless it is a majority party. Party before country, as ever. The party of the crash won’t serve in office with Sinn Féin or anybody else it seems.

The Independents are incapable of the discipline required for government. Renua and the Social Democrats only exist because they ducked their responsibilities. The so-called left are nothing but anarchists opposed to everything.

It is a recipe for chaos – political first then economic.

Labour and Fine Gael have worked hard to bring this country back from economic ruin.

We share one central goal: to protect the progress made in our first term and build on it going forward.

Yes, we are two distinct parties, representing the two opposing traditions in European politics. But we’ve a proven track record of working together.

Ireland needs stability to prosper and only Labour and Fine Gael can provide it. Brendan Howlin is Minister for Public Expenditure & Reform

1 A letter to Ireland from Italy: this is what we know about your future
2 Look on the bright side: International Space Station visible in Irish skies tonight
3 Coronavirus: 133 patients in intensive care as pressure on hospitals builds
4 Coronavirus: Spain and UK suffer highest daily death tolls
5 Tempers fray as coronavirus lockdown fatigue hits Italy and Spain
Real news has value SUBSCRIBE