‘Some people are already wondering if Francis will follow the humble example of his predecessor and retire’. 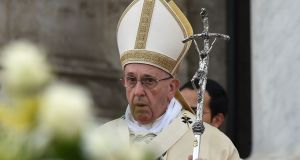 ‘If Pope Emeritus Benedict were still alive when Pope Francis (above) retires it would no doubt trigger some epic event. Certainly if the prophecies of St Malachy and Nostradamus that my father relished telling me about are anything to go by.’ Photograph: Alberto Pizzoli/AFP/Getty Images

If the pope visits Ireland for the World Meeting of Families (WMOF) in August 2018, one of his first stops should be in Seán MacDermott Street.

In 1979, when Pope John Paul II visited Ireland, the locals put enormous effort into preparing for a proposed visit to the shrine of Matt Talbot. However, because he was delayed elsewhere, the pope’s cavalcade simply swept past on the way to Dublin Castle.

One disappointed resident was reported as saying that not even a joyrider had ever come down the street so fast. Decades on, the hurt is still felt in this neglected community.

A visit to Seán MacDermott Street would be very much in keeping with Pope Francis’s outreach to those on the margins of privilege but, of course, it may not be Francis who visits.

Some people are already wondering if Francis will follow the humble example of his predecessor and retire. Of course, if pope emeritus Benedict were still alive when Francis retires it would no doubt trigger some epic event.

Whether or not it is Francis who comes to Ireland, the pope will be coming to an Ireland utterly changed since John Paul’s visit.

No one predicted that better than John Paul himself. Reading his 1979 addresses, in almost all of them he speaks of choices facing Ireland.

In a 1979 Ireland that had no notion it might ever be prosperous, he spoke of the dangers of prosperity, including that “many people now are tempted to self-indulgence and consumerism, and human identity is often defined by what one owns”.

The prophecies of St Malachy may be highly dodgy, but the prophecies made by St John Paul proved to be spot on.

It is highly significant that Pope Francis chose Dublin for the World Meeting of Families in 2018. The smart money was on Paris, a choice that made great sense given what Le Figaro last November called “La révolution silencieuse des Catholiques de France”– the silent revolution of Catholic France. The piece was accompanied by a photo of Notre Dame de Paris packed to the rafters with university students at Mass.

Of course, Mass attendance in France is still catastrophically low, but there is a surprising resurgence in grassroots Catholicism that is very interesting.

So why the unexpected switch to Dublin? Pope Francis has a soft spot for Ireland, having attempted to learn English here for a few months in 1980. But the decision to bring the World Meeting of Families to Ireland has little to do with nostalgic personal memories, I suspect.

It has more to do with offering a vibrant image of Christian family life at a time when Ireland seems to have forgotten there is anything positive about Christianity, aside from admiring the work done by stalwart individuals or organisations serving the poor and disadvantaged.

It has some similarities to a Eucharistic Congress, which was an incredible event when it was held here in 2012.

In 2012, people attended events in the RDS, seeing thousands of pilgrims from all around the world, realising not only that Ireland is a very small part of a universal church, but that rumours of the Irish Catholic Church’s demise had been greatly exaggerated.

It didn’t matter if you were on the liberal or conservative wing of the church. For a few short days, all that mattered was sharing a common faith and hope.

There are lessons to be learned from the Eucharistic Congress. The organisers thought the real interest would be in the talks by well-known international figures, but completely underestimated the interest in workshops.

There were queues for every workshop, and hundreds were turned away. There is a huge hunger for challenge and nourishment among Irish Catholics and their fellow Christians in other denominations, and WMOF has an opportunity to feed that hunger. It has an opportunity to present a vision of family life that is both inspiring and practical, aware of the messiness of lives but also of people’s hunger for a wider horizon, one that challenges but also heals.