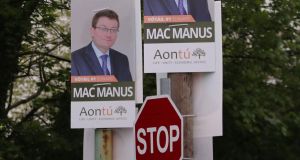 Edward McManus of Aontú poster: a moderate party with a social justice agenda being ignored by the media. Photograph: Nick Bradshaw

It is a wonder that air traffic control systems did not crash due to interference this week, given all the virtue signalling that was going on from the ground. Whatever you think about Donald Trump, and I dislike his meretricious egotism as much as the next person, he manages to dominate the media agenda through sheer brazenness.

Not everyone has the armour-plated hide to bulldoze right through the horrified disdain of the mainstream media. I am not recommending it as a tactic, not least because when the president of the United States is an online bully, the level of public discussion becomes even more debased as a result.

However, his tactics render null a hidden power of the media, which is simply to render certain views invisible by rarely acknowledging or reporting on them. This little-discussed aspect of the media is actually a far greater power than negative reporting.

Donald Trump grasped that fundamental lesson long ago. He thrives on being too big, too juicy a story to ignore. He is the spawn of an unholy alliance between celebrity and money and he knows exactly how to get appalled hacks to report on his every move.

But what if you are not a giant blimp of a personality whose creed seems to be that there is no such thing as bad publicity? What if you are a small political party attempting to give democratic representation to a section of society alternately ignored and scornfully dismissed by politicians and media?

But what if you are not a giant blimp of a personality whose creed seems to be there is no such thing as bad publicity?

This is the position that Aontú finds itself in, an unwilling possessor of the superpower of invisibility. Aontú’s launch got “blink and you’ll miss it” coverage. Those old enough to remember the media frenzy surrounding the launch of the Progressive Democrats might note the contrast. Of course, at the time of that launch, Fianna Fáil was considered a regressive, throwback party.

Now that it has meekly crept into line with allegedly progressive policies, it no longer receives the same degree of media opprobrium. When the Progressive Democrats seemed likely to attract Fianna Fáil defectors, that made the media salivate. This time around, there are many people within Fianna Fáil whose natural home should now be with Aontú but the media have no interest in drawing attention to that.

It was fascinating to see that RTÉ named and provided information and icons for all other Dáil parties, including Independents for Change, on all their broadcast and internet services in their local election coverage.

However, they failed to do the same for Aontú despite the fact that Independents for Change and Aontú are both Dáil parties and achieved the same local election results. Nor was it just broadcast media that ignored them.

In contrast, there was a striking infatuation with the Green party. Again, the Greens are much more popular with the media since they abandoned neutrality on certain social issues. Whether the current love-in will have evaporated in six months is another issue. If I were a Green politician, I would be busy milking it while it lasts because their primary cause is vital.

One might have thought that the media would have been interested in a real challenge to Sinn Féin and in analysing the damage that may have been done by Aontú. To take 750 votes in Blackmountain in the heart of republican West Belfast was no mean feat but that particular tree may as well have never fallen in the forest of media indifference.

Invisibility is a real problem, especially since fewer people are opening doors to canvassers. In spite of all the obstacles, a party only in existence for 20 weeks managed to recruit 2,000 members, and establish over 60 cumann in both the North and South. Sarah O’Reilly topped the poll in her first election in Bailieborough, Co Cavan. Emer Tóibín took a seat in Navan. Jim Codd got elected in Wexford. Again, if people were relying on media coverage, they had to be sure not to blink too much.

Celebrity helps to attract attention. But if Aontú had a Rose of Tralee running for them and farmers queuing up to take selfies with her at marts, I doubt if the media would have paid attention even then.

One could suggest using social media but the online giants’ algorithms are not exactly friendly to parties like Aontú either. What remains? Good old-fashioned public service and the long, hard slog to make changes in housing and other local issues, that’s what. And sticking to principles because without them, a party becomes just another part of the soggy centre.

Mind you, it might be no harm, if the media possessed such a thing as a collective conscience, if it reflected on the consequences of ignoring a moderate party with a social justice agenda like Aontú. It might also reflect on the noxious right-wing populist parties that may emerge into the apparent vacuum. But perhaps the media are too busy gasping in horror at Trump’s antics as he triumphantly flogs his patented brand of outrage, which keeps him right where he wants to be – at the centre of media attention.

1 Parents jailed over female genital mutilation of daughter
2 Gardaí may have to wait days to interview mother of McGinley children
3 McDonald and SF candidates sign pledge to be guided by ard chomhairle
4 Ireland v Scotland: Doris’ day as Caelan set for first cap
5 ‘We serve neither Queen nor Commisar’: The birth of the Provisional IRA
Real news has value SUBSCRIBE