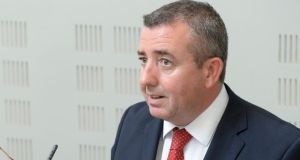 ‘Having carefully framed their terms of reference, the inquiry’s chairman Ciarán Lynch TD and his colleagues have settled down in their first module to a careful consideration of the context in which the banking and fiscal crisis arose.’ Photograph: Dara Mac Dónaill / The Irish Times

For a while now I had been meaning to look in on the banking inquiry. It was only earlier this week that I finally got around to watching it on the Oireachtas website. Like many I had been sceptical of its prospects given the various delays and wrangles preceding its establishment.

Checking in on it at a number of points in the past few days, however, it was apparent that having carefully framed their terms of reference, the inquiry’s chairman, Ciarán Lynch TD, and his colleagues have settled down in their first module to a careful consideration of the context in which the banking and fiscal crisis arose. The hearings are not exactly riveting, but they are certainly informative. They may lack the courtroom-like drama of tribunal cross-examinations but the deliberations of the banking inquiry are serving a useful purpose in excavating some of the terrain in which our crisis flourished.

One of the more interesting sessions I happened on was from Tuesday morning, which looked at the role of the Oireachtas in the lead-in to the crisis. It began with a paper by David Farrell of UCD, focusing on the role of parliament in scrutinising government. He set out three criteria to which we should have regard when assessing whether a parliamentary democracy is or can be effective.

The second set of criteria Farrell offered by which the effectiveness of parliament can be measured is the attitude of the parliamentarians to their function and to the use of their powers. “The ‘culture’ of the parliament needs to be attuned to its role as a more equal player vis-a-vis the government,” he said. He itemised a series of powers that Oireachtas committees already had which could and should have been used to test the general assumption that all was well with banking and with the public finances during the boom years. There was, however, a marked reluctance on the part of TDs and Senators to use the powers they had.

Even if these first two elements are in place, Farrell pointed out that a parliamentary democracy will be ineffective unless there is a culture of openness and transparency in government generally and, in particular, unless parliament is given access to information and is able to question key officials, especially on the budgetary process.

Farrell’s blunt conclusion was that the Oireachtas failed to spot the mounting problems in the lead-in to the crisis.

The real significance in Farrell’s evidence was how during subsequent questioning by members of the inquiry he emphasised that the weaknesses in our parliamentary system endure. He described recent reforms as “merely cosmetic”.

He identified two reforms expressly promised in the programme for government that have not been implemented: the overhaul of the secretive Irish budgetary process and the lifting of restrictions on what civil servants are allowed to say to Oireachtas committees about advice provided to ministers.

In Dáil reform, as in so many other respects, it seems the crisis has been wasted.

Indeed it was striking watching Farrell’s evidence how much it echoed similar evidence given by others before the Dirt inquiry conducted by an Oireachtas committee a decade and a half ago. That inquiry concluded that failure in parliamentary scrutiny contributed to the Dirt tax scandal and the inquiry report published in 1999 contained a full chapter on the need for Oireachtas reform.

While some of the recommendations to strengthen the Oireachtas recommended by the Dirt inquiry were implemented, subsequent governments retained their vice-like grip on the parliamentary agenda and TDs and Senators continued to be timid in the exercise of their powers. Further breakdowns in parliamentary scrutiny were almost inevitable.

Unless real Dáil reform follows on from the bank inquiry, there is every likelihood our Oireachtas will also fail to spot the next crisis.