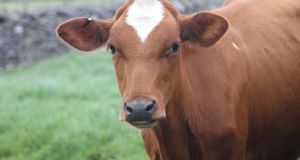 A talking cow who bad-mouths the then 28-day March from the supposed safety of April. Photograph: iStock

As if the Brexit deadline wasn’t ominous enough already, I realised this week that it is scheduled to coincide in Ireland with the annual visitation of the Bó Riabhach, or “Brindle Cow”. This is our version of a European folk tradition whereby the last three days of March are said to be “borrowed” from April, and guaranteed to produce extreme weather.

There is an Anglo-Scottish version of the myth too, hence the old rhyme: “March borrowed frae Aprile/Three days and they were ill;/The first of them was wind and weet,/The second o’ them was snaw and sleet,/The third o’ them was sic a freeze,/That the birds’ legs stack to the trees.”

But the Irish tradition is all about a talking cow, who bad-mouths the then 28-day March from the supposed safety of April, until the vengeful previous month announces an extension and orders extra-violent conditions. The first day’s storms knock the cow over; the second day kills her; the third bleaches her bones.

Oh well. It’s too early yet to worry about her. Perhaps it will be a person named for another month – May – who instead applies for extra time from the 29th.

Either way, we can expect a lot of windy conditions before then.

Mythology aside, cows have had a real influence on the Brexit negotiations. They have been the poster animals of the saga, ever since Michel Barnier first posed for pictures amid a field of them during a fact-finding trip two years ago.   That their pasturelands transcend the Border has been one problem for Brexiteers. But in a sense few British people would understand, cows also own the road network. This is because they gave us the very word in Irish for road – bóthar – along with its Hiberno-English diminutive, boreen.

Bóthar once signified a road designed for cattle, and was measured accordingly. As decreed by the 10th-century King of Munster, Cormac MacCuilenáin, its breadth had to be sufficient that “two cows fit upon it, one lengthwise, the other athwart, and their calves and yearlings [...] along with them.”

The sheer proliferation of roads across the Border is one of the things that has undermined Brexiteer fantasies of a clean break with Europe. Many of the roads are indeed bothar-sized, and don’t appear to be going anywhere in particular. If not actually designed for cows, they must at least have been inspired by the tradition.

**** Bear with me while we take a short detour down one of them – this picturesque boreen here – and mind the cowpat. But when first reading up on the Bó Riabhach some time ago, one of the places I found her was in a 2001 Weather Eye column by this newspaper’s late, lamented Brendan McWilliams.

Being about the unpredictable nature of March weather, that column also featured a quotation in that vein from a John le Carré novel, A Small Town in Germany (1968). I had not known of the book until then, but it was doubly relevant to McWilliams because, as he said, he lived in a small town in Germany himself.

As I now realise, le Carré’s town was Bonn, described by one of his characters as “half the size of the Chicago cemetery, and twice as dead”. Despite which, it was capital of West Germany: hence its use as the setting for a spy thriller about a missing British diplomat.

But what’s most striking about the book today is how cyclical some of the themes are. There is despair about the state of British politics, for example.

Another sub-theme is concern about the renewed rise of Germany’s far right.

And of course, part of its backdrop was the possibility of the UK joining the Common Market, about which Germans were also uneasy.

As another character explains: “That’s what we don’t like about the English anymore. They don’t know how to do a deal.”

We seem to have gone half-circle, at least, in 50 years. But speaking of circles, we also seem to be back out on the main road here. And there’s our old friend the Brindle Cow again, off in the distance, grazing unwarily on the side of an April hill.

As I say, it’s premature to worry about her yet. There will be plenty of weather even before March 29th. No doubt there will also be interventions by other semi-mythical creatures.

Who knows, they may yet include one by the fearsome ox-like animal, infamous for rampaging through everything from wheat fields to miniature Japanese rugby players, and known popularly as the Bó-Jo.