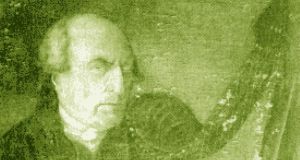 Around 1904, Charlotte Milligan-Fox, folk-music collector and sister of nationalist poet Alice Milligan, dropped into a musical instrument warehouse in London. As she wrote, “It came into my head to ask, ‘Do any old wandering harpers ever come in here to buy strings?’ The attendant smiled somewhat cynically, and I felt that my question had been a foolish one, for the days of the last minstrels are surely over.”

But the question turned out to be a momentous one, for the attendant directed her to Dr Louis MacRory of Battersea, who was the grandson of Edward Bunting, the renowned collector and publisher of three collections of the harp music of Ireland. Dr Mac Rory had boxes full of his grandfather’s papers, which – after assuring himself that she was a proud Irishwoman – he handed over to Charlotte. It was a treasure trove! The papers included the original notebook that Bunting had used to take down the tunes of the harpers at the famous 1792 Belfast Harp Meeting. He was only 19 at the time, and he was so taken by the music and by the harpers themselves, that the collection and publication of this music became his life’s work.

His memoir is a lively and often humorous series of anecdotes that gives a wonderful glimpse of a wandering harper’s life and the society that he played for.

He tells of his travels around Ireland and the hospitality he found in the big houses, where a harper was always welcomed. He names the harpers he met, tells us whether they were blind or not, and whether they were good players. He names approximately 50 contemporary with himself, both men and women, and tells stories that he had heard about famous harpers of previous generations, such as Carolan, Lyons, Quinn, the Connellan brothers, and Ruairí Dall Ó Catháin.

But it is his anecdotes that bring the harpers to life so wonderfully. He tells of his friend, Thady Elliot, a blind harper, who was to play at the Mass in Navan on Christmas Day. In his own words: “A humorous fellow took Thady to a public house and promised to give him a gallon of whiskey if he would rattle up ‘Planxty Connor’ at the time of the Elevation, which Thady promised to do. And, indeed, after playing suitably sacred airs up to the Elevation, Thady ‘lifted up Planxty Conor’. The priest, who was a good judge of music, knew the tune, but at that solemn stage of the ceremony he could not speak to Thady, so to show his disapprobation he stamped violently where he stood at the altar, so much so that the people exclaimed in Irish, ‘Dhar Dhiah thaw Soggart a dhounsa’, that is ‘By God, the Priest is dancing!’”

In another anecdote, Arthur tells how a young nobleman was able to ask for a tune he much admired but couldn’t remember the name of. He told Arthur that the title sounded like “Tommy MacCullagh made boots for me”. Arthur immediately identified the tune as Tá mé i mo chodladh ’s ná duisigh mé and played it for him, which pleased the young man no end.

The 18th-century harpers lived in a bilingual world, where the music and songs were part of the Gaelic world and their patrons were, more and more, part of the English-speaking world. They were travellers who not only visited every part of Ireland, but also travelled to Scotland, England and even Europe.

By the end of the 18th century, their music and their instrument (the wire-strung diatonic Irish harp) were on the wane.

Fortunately for us, at this crucial moment, a move to strengthen Irish national identity encouraged the collection and preservation of native Irish music and song. The Belfast Harp Meeting and Edward Bunting’s life-long interest in preserving not only the tunes, but also information on the instrument, and its players, such as Arthur Ó Néill, has given us a wonderful record and resource for the unique instrument played in Ireland from at least the 12th century to the beginning of the 19th century.

Information on Scoil na gCláirseach and the associated concerts is available at irishharp.org

Charlotte Milligan Fox, who died on March 25th, 1916, just before the Rising, published Arthur Ó Néill’s complete memoir in Annals of the Irish Harpers, which has been lovingly re-edited by Sara C Lanier (Ardrigh, 2003). Edward Bunting’s papers are in the library of Queens University, Belfast. Some are digitised and available online.

1 Midlands lockdown: Movement restrictions in place for residents of Kildare, Laois and Offaly
2 Midlands lockdown could extend to other areas, warns Covid-19 team
3 Masks Q&A: Who has to wear them in shops and what happens if you don’t?
4 Meat plant clusters may be down to softly-softly approach
5 Main points: What restrictions have been imposed on Kildare, Offaly and Laois?
Real news has value SUBSCRIBE