An Irishman’s Diary: Finding the memorial to the victims of the Invincibles

Frank McNally on a most discreet memorial 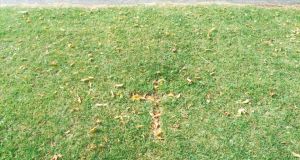 A cross etched in the grass – the memorial to Frederick Cavendish and Thomas Henry Burke, killed in the Phoenix Park by the Invincibles. It is one of the most discreet memorials you will ever see.

I must have walked, run, or cycled every corner of the Phoenix Park over the years. But until recently, I’d have sworn that among the multiple heritage signs and memorials scattered around the 1,752 acres, there was no marker anywhere to the most notorious incident in the park’s history, the 1882 murders of Frederick Cavendish and Thomas Henry Burke.

Then I thought to check with Senan Molony, who wrote a book about the event some years ago. He assured me that, on the contrary, there was a cross cut into the grass embankment where the two men died, on the side of the main road opposite Áras an Úachtaráin. Then the Viceregal Lodge, it was from this building that the killings were half-witnessed.

So the next time I went running that way, I watched out for the cross but still it escaped me. And not until I went back again, this time walking and armed with all but the Google Earth coordinates of the spot, did I finally find it. Barely 60cm long, thinly cut, and filled with a smattering of gravel, it is one of the most discreet memorials you will ever see.

Fragile as it looks, mind you, it has been there a long time. The tradition of commemorating the spot goes right back to 1882 and, it seems, began with the man (or one of them) who first came across the bodies. He took to laying flowers there every May 6th, the anniversary, and this was carried on by his children and grandchildren, and then by their friends.

The memorial was well-established by 1937 when Frank O’Connor cowrote a play about the assassins, The Invincibles. This attracted the attention of Eamon de Valera, who asked the authors if they knew of the cross and told them where to look for it.

Forty years later, an American biographer of O’Connor, Jim Matthews, also found it while jogging in the park and noted it had a sprig of berried holly planted in the middle. The holly has disappeared since but somewhere down the decades the unofficial memorial has evolved into a responsibility of the OPW which maintains it. So I suppose that makes it semi-official.

The assassins almost certainly didn’t know who Cavendish was. The unfortunate man had just arrived in Ireland hours before. He was a conciliatory new appointment as chief secretary after the hated “Buckshot” Forster with whom Burke, as permanent undersecretary, was closely associated.

Cavendish knew Dublin and had the bad luck to be walking out to his official residence (now the US ambassador’s) when joined by Burke, who had been passing in a carriage. Thus the pair died together. In due course, five of their killers swung for it, fingered by the man who’d ordered the crime, James Carey.

He had thought to have saved his own neck in the process. But the ship that was supposed to take Carey to a new life in Australia diverted him instead to eternity, via his nemesis Patrick O’Donnell, who sparked bonfires back home, before following the five Invincibles to the gallows.

That was just the direct chain of events. Among the political ramifications, the murders also led to a split in the British Liberals, postponing home rule – or its enactment – for a generation, despite the ambitions of prime minister Gladstone (Cavendish’s uncle through marriage).

The cross-currents, even today, mean that some people think the memorial is for the Invincibles, a fact sometimes reflected in the flowers. Meanwhile, the difficulties of providing something more visible are illustrated by a stone mile marker nearby. It has been decapitated either through mindless vandalism or by somebody who mistook it for the memorial.

The cross without commentary may be another Irish solution to an Irish problem. And at least one of the widows left behind by the events might have settled for it. A devoutly religious woman, Lucy Cavendish is said to have quickly forgiven her husband’s killer, expressing hope his sacrifice would bring peace to Ireland.

She died in 1925. But on the eve of The Invincibles opening at the Abbey in 1937, an unidentified old woman came to the theatre and handed the authors a bag containing the belongings of one of the executed killers, Joe Brady. It included a small crucifix said to have been sent to him by Mrs Cavendish the night before he died. @FrankmcnallyIT

1 Two in custody after Ryanair flight to Dublin forced to divert
2 David McWilliams: ‘Ireland is three decisions away from being a perfect country’
3 Mandatory quarantine and flight cancellations unlikely despite rise in cases
4 My aunt never told us that Gran passed away with no will
5 Game Changers: Gary O’Toole took a stand when others turned their heads
Real news has value SUBSCRIBE