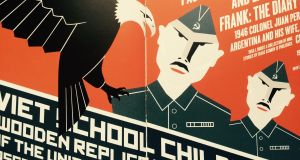 It takes a certain amount of courage for a movement called “21st Century Renaissance” to mount an exhibition of art and ideas in Dublin at a time when Leonardo da Vinci – or at least some of his work – is in town.

But such is the position that Alison Hackett, founder of the aforementioned group, finds herself in this week. Not only is she forced to share a small city with da Vinci, he has even turned up in the same postal district.

1 Parents jailed over female genital mutilation of daughter
2 Gardaí may have to wait days to interview mother of McGinley children
3 McDonald and SF candidates sign pledge to be guided by ard chomhairle
4 No obvious signs of injury on remains of McGinley children
5 General election debate: Leaders fail to hit home runs but avoid major mishaps
6 Ireland v Scotland: Doris’ day as Caelan set for first cap
7 Housing the dominant issue in seven-way general election debate
8 Election 2020: Party leaders clash on multiple issues in TV debate
9 Varadkar blames British ignorance of Ireland for Brexit impasse
10 Thomas Markle: My Story – ‘It’s time to look after Daddy’
11 Why our love for Leo is withering on the vine
12 Man given suspended sentence for assaulting transgender escort
13 Election 2020: Sinn Féin wants new 5% tax on people earning over €140,000
14 I’m Irish and I live abroad. Why have we been forgotten in Election 2020?
15 Coronavirus: Irish in Wuhan say they won’t leave Chinese partners behind
16 McGinley deaths: ‘I will always remember your three happy faces’
17 Gary Lineker: ‘60 is just a number, 70 is the one to worry about’
18 Daughter insisted she did not ‘harm a hair’ on Patricia O’Connor’s head
19 US threatens retaliation against EU over proposed carbon tax
20 Brexit is a collective English mental breakdown
21 Fintan O’Toole: The terms of Brexit hold a great irony
22 Six Nations: Pundits, journalists and players have their say
23 Auschwitz anniversary: ‘I probably saw 300,000 Jewish people perish right in front of me’
24 Plans to evacuate Irish citizens from China virus epicentre under way
25 Why are Fine Gael and Fianna Fáil refusing to go into coalition with Sinn Féin?
26 ‘We serve neither Queen nor Commisar’: The birth of the Provisional IRA
27 Judge dismisses Kobe Bryant rape case
28 Brexit: Michel Barnier says EU ‘will not turn its back’ on North
29 The notorious Donald John Trump goes on trial
30 Ireland’s housing crisis in five revealing graphs
31 Over-competition in sport is bad for children’s mental health
32 Una Mullally: Those attacking Sinn Féin have become cheerleaders in reverse
33 2020 bargain cars: What to buy with a limited budget in mind
34 Corey Taylor: After 20 years in Slipknot we are all beat up
35 Money matters: ‘My father embarrassed us with his haggling’
36 Kildare priest appointed new Catholic bishop in west of Ireland
37 Fintan O’Toole: Historians will not believe sheer ignorance of Brexit supporters
38 EU hails sacking of Ukraine’s prosecutor Viktor Shokin
39 Are almonds bad for the environment?
40 The Irish Times view on the coronavirus outbreak: China’s big experiment
Real news has value SUBSCRIBE