A revolutionary novelist – An Irishman’s Diary on Máirtín Ó Cadhain 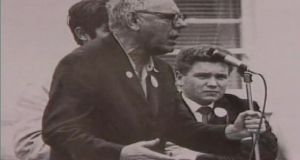 Máirtín Ó Cadhain: one of the foremost writers to promote modernism in Irish-language writing

Teacher, writer, academic, republican and Irish-language activist Máirtín Ó Cadhain, who died 50 years ago on October 18th, would probably be seen as one of the foremost writers to promote modernism in Irish-language writing, especially as a result of his extraordinary 1949 novel, Cré na Cille, which has been translated into several other languages.

He was born near Spiddal, Co Galway, in January 1906, the eldest to survive of 13 children of small-farming parents.

Having attended primary school in Spiddle from 1911 to 1924, the final six years as a monitor (a student appointed to assist a teacher), he won a scholarship to St Patrick’s College, Dublin, where he trained as a primary teacher.

From 1926 to 1936, he taught in schools in Connemara and near Galway city, beginning during this time a lifelong collection of folklore and materials relating to the Galway Irish-language dialects.

During this period, he also pursued other activities. With others, he founded Cumann na Gaeltachta in 1932 and Muintir na Gaeltachta in 1934, which campaigned to improve the lot of people living in the Gaeltacht; one of the results was the moving of families from Connemara to land acquired by the government in Co Meath, leading to the establishment of Ráth Chairn.

He had also joined the IRA while teaching in Galway and this led to his dismissal in June 1936, on the orders of his local bishop, after he led a group of Galway republicans to the Wolfe Tone commemoration at Bodenstown. After moving to Dublin, he recruited for the IRA and joined its army council. He was interned from September to December 1939 and again 1940 to 1944. During internment in the Curragh he gave classes in Irish, history and French; he was a gifted teacher and made a lasting impression on those he taught. He also continued his own learning and studied all the Celtic languages, and French, Spanish, Italian, German and Russian.

Following his release, he worked at various jobs until securing a position on the Oireachtas translation staff in 1947. He married Máirín Ní Rodaigh, a primary teacher from Cavan, who taught in the new gaelscoil, Scoil Lorcáin, in south Dublin.

He had published folklore and some short stories, as well as translations for An Gúm (the Irish-language publication unit of the Department of Education) during the 1920s and 1930s. His first short-story collection, Idir Shúgradh agus Dáiríre, was published in 1939 and a second volume, An Braon Broghach, in 1948.

His magnum opus, Cré na Cille, appeared in 1949, “a revolutionary novel in language, form and subject”, according to one commentator. Its characters are the dead in a Connemara graveyard and their talk is full of gossip, intrigues, backbiting, petty jealousies, squabbles and scandalmongering. It proved widely popular and Unesco has since chosen it for translation into several languages as part of a series featuring masterpieces in the world’s lesser-known languages.

Thanks to the campaigning of his friends and his publisher Seán Ó hÉigeartaigh, Trinity College Dublin offered him a post in its Irish-language department in 1956; this was unusual given his political reputation and lack of postgraduate qualifications. He proved to be a very successful and popular lecturer, becoming associate professor of Irish in 1967 and professor in 1969. He wrote a weekly column for this newspaper from 1953 to 1956, on a wide range of literary, linguistic, political and economic topics.

A third volume of short stories, Cois Caoláire had been published in 1953 and displayed a new versatility in his short-story writing. An tSraith ar Lár, a further collection published in 1967, confirmed that he “could accomplish delicate studies of conscience and character with masterful and at times blistering prose”, according to commentator Dónall Ó Braonáin.

He continued his Irish-language campaigning, opposing the ending of compulsory Irish in State exams and for recruitment to the public service, which led him to have frequent clashes with the Language Freedom Movement. Activism on behalf of the Gaeltacht regions also continued to be an important part of his life.

He left a large amount of unpublished work behind him at the time of his death in 1970. Two other volumes of short stories, An tSraith dhá Tógáil (1970) and An tSraith Tógtha (1977) and two further novels, Athnuachan (1995) and Barbed Wire (2002) were published posthumously.

Dogged by ill health and deeply affected by the untimely death of his wife, he was buried in Mount Jerome Cemetery in Dublin following his own untimely death. Few would disagree with the verdict of Iontaobhas Uí Chadhain, the trust set up in 1988 to look after his papers, that he “left an indelible mark on the tapestry of the Irish language and its prose literature”.

1 Gardaí believe men in Cork murder-suicide chose to let woman survive
2 James Bond actor Sean Connery dies aged 90
3 Richard Ford: America could fail. I have never felt this way before
4 Supermarkets compared: How Dunnes, Lidl, Tesco and M&S measure up
5 ‘In Crete I pay 70% of what I paid for a shoebox apartment in Dublin’s docklands’
Real news has value SUBSCRIBE