A referendum on Irish unity is coming, whether we like it or not

Brexit has bulldozed the foundations of the union, so North and South need to prepare 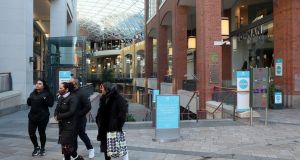 This prospect is arriving faster than most expected.

Demographic change is converting cultural Protestants into an electoral minority. Unionists with a big U are already a political minority. Maintaining the union therefore depends on the consent of cultural Catholics, whose opinions on that union are more volatile and averse than those held among those of Protestant heritage.

That union, moreover, has had its foundations bulldozed by the Brexiteers.

Forced out of the EU against their will, Scots will respond by providing the SNP with a mandate for a second referendum on independence. Thanks to John Major the Stone of Scone, the symbol of Scotland’s sovereignty, has been repatriated; the Scots now want the substance.

The misalliance of the DUP and the Brexiteers has shaken and stirred the UK’s second union – that of Great Britain and Northern Ireland. Neither set of sectaries promised this outcome, but since January 1st Northern Ireland is under the joint authority of the EU and the UK – a tribute to Boris Johnson’s career in truth-smashing.

To address rational fears, Northern Ireland has been re-engineered in a remarkable improvisation. It is now a double “federacy” or an annex to two different unions. The Belfast Agreement “in all its parts” is now protected in two treaties: the one Ireland and the UK ratified in 1999, and the 2019 Protocol on Ireland and Northern Ireland agreed between the UK and the EU that has just taken effect.

Rube Goldberg, Heath Robinson or HR Giger would be required to visualise the new order. Northern Ireland remains within the EU’s single market for goods, and, for practical purposes, in its customs union, but without European political institutions. Unless Stormont decides otherwise in 2024, the Government of Ireland will have more influence on economic regulations affecting Northern Ireland than the Westminster parliament.

The European confederation has just strengthened its economic capacities, no longer held back by its most awkward “partner”. That matters to Northern cultural Catholics who overwhelmingly supported remaining in that confederation, along with a minority of liberal Protestants. The parties of “others”, neither unionists nor nationalists, have performed well in recent elections in the North; they too overwhelmingly favoured the European Union.

To resume full citizenship of the European confederation, many northerners have taken out Irish passports. Up to half the population have them, while the number taking out UK passports has slid. Later, they may support Irish unity to return to the European Union – not to Pearse’s, Cosgrave’s, or de Valera’s Ireland.

Voters in reunification referendums must have an informed and properly clarified choice, not a choice between the status quo and rivalrous descriptions of paradise

Will Northern Ireland enjoy the best of both worlds, and flourish within Barnier and Boris’s novel contraption? Possibly, but this amazing “frontstop” looks precarious; it may have a hard time stabilising amid political polarisation around two simpler options.

“Scrapping the protocol” is the DUP’s ambition; the obvious alternative is Irish reunification within the EU.

Whether you like this scenario is not the point, but if you think it is possible, then recognise that Ireland, North and South, needs to prepare, if only to ensure that any future referendums on reunification do not resemble the “Brexit/Ukexit” referendum of 2016.

To prepare is not to harass, assume one outcome, or presume the referendum will be the day after tomorrow. Preparation can be open, peaceful and pluralist, ensuring multiple voices are heard, and available to constant correction.

Not to prepare is to take the ostrich as the paragon of political virtue.

The South is most obliged to prepare properly because, under the Belfast Agreement, the initiation of a Northern referendum on unification rests with the UK secretary of state; Dublin has no veto and could be taken by surprise.

Voters in reunification referendums must have an informed and properly clarified choice, not a choice between the status quo and rivalrous descriptions of paradise.

The onus to clarify rests with the South. All parties in the Dáil must decide between offering a precise model of unification or offering a detailed constitutional process that would follow affirmative votes for unification.

Clarifying choices, and developing a feasible plan, are not for an op-ed. The same is true of the power-sharing securities needed for people of British identity and citizenship.

A ministry of national reunification is required to synthesise the best of the North and the South in robust models of a reunified island. It must engage unionists, nationalists and others – the latter and “soft nationalists” will be the pivotal voters in the North. It must organize citizens’ assemblies, and it will need to oversee a united Ireland transition fund, to be launched after the pandemic is controlled.

Brendan O’Leary is Lauder Professor of Political Science at the University of Pennsylvania, the author of A Treatise on Northern Ireland and a founding member of arinsproject.com which is being launched on Monday January 11th. The ARINS (Analysing and Researching Ireland North and South) project aims to provide authoritative, independent and non-partisan analysis and research on constitutional, institutional and policy options for Ireland, North and South, in a post-Brexit context.