Stephen O’Byrnes: Opposition to a deal with Fine Gael likely to be far less than Haughey faced 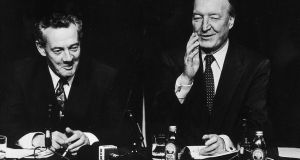 Progressive Democrats leader Dessie O’Malley and Fianna Fáil leader Charles Haughey: the circumstances were much more toxic in 1989, when the likely government-making option settled on the Fianna Fáil-PD negotiations.

The racing certainty now is a hung Dáil and, flowing from that, the emergence of a Fine Gael-Fianna Fáil coalition as the most stable and ideologically coherent option.

Of course, the leaders of both these parties are swearing blind that this will never happen. That, too, made perfect sense before polling day, as both Enda Kenny and Micheál Martin strove to optimise support for their respective parties. But linguistic obfuscation will no longer be an option as the tyranny of the numbers game begins.

A spectacular tragicomic drama will then commence, with an extensive cast of characters. Every small party leader and Independent will get to strut their stuff, and spell out their uncompromising bottom-lines for participating in, or supporting, a government. Such play-acting is certain to dominate much of next week, but very soon the weighty commentators and thundering editorials will start demanding a stable government; especially one that ticks the stability and compatibility boxes.

Finally, blushing and protesting, Enda and Micheál will be prevailed upon to step into the limelight. The handbook for the unfolding drama, based on circumstances that were just as unlikely then, was penned back in 1989 when Fianna Fáil – for the first time in its history – embraced the coalition option with its despised foe, the Progressive Democrats.

To understand what may happen now, let’s recall what happened back then. In the days immediately after the June 15th election, when Charlie Haughey’s minority government fell short by six seats of a minimum overall majority of 83, he held a round of talks with the other party leaders. Alan Dukes, then Fine Gael leader, demanded seven of the 15 cabinet seats and a revolving taoiseach (meaning he would assume the role for the second half of the government’s five-year life). But since coalition was simply anathema to Fianna Fáil, and since even some of Dukes’ own frontbenchers felt his pitch was utterly unrealistic (they had 55 seats to Fianna Fáil’s 77), this went nowhere. The Labour leader Dick Spring refused to do business, as did the PD leader Des O’Malley.

And so, when the 26th Dáil convened on June 29th, 1989, for the first time in the history of the State TDs failed to elect a taoiseach. After nominations for Haughey, Dukes and Spring were all defeated, it was agreed to adjourn the Dáil until July 3rd for more talks on the possible formation of a government.

However, before that inaugural sitting concluded there was a major row, and much waving about of the Constitution, when Haughey indicated his intention to continue as taoiseach. This was only resolved after advice from the Attorney General, resulting in Haughey going to the president and tendering his resignation. This meant that his status was now that of “acting taoiseach” and his government was the “acting government”.

Therefore, we can speculate that in the event of no interparty deal being done in the meantime, when the new Dáil sits for the first time on March 10th if neither Enda Kenny, nor the leaders of Fianna Fáil, Sinn Féin or Labour secure the minimum 80 votes to become taoiseach, Kenny will have to tender his resignation, and he and his government will continue in an “acting” capacity.

Just as happened in 1989, it is likely to be at this juncture that the rubber will hit the road in terms of serious interparty dialogue. Ignore all the public posturing that will inevitably unfold on all sides, and there will be plenty of voices on-stage, in their parliamentary parties, and off-stage too from Fine Gael and Fianna Fáil organisational units, that political “treachery” by their leaders will not be tolerated. There will be plenty of guff too about Fianna Fáil supporting a minority Fine Gael government from opposition but that will dissipate as mere hot air.

Actually, the circumstances were much more toxic in 1989, when the likely government-making option settled on the Fianna Fáil-PD negotiations. Fianna Fáil had been deeply riven since the anti-Haughey heaves of the early 80s, and the PDs were regarded by them as traitors and deserters. Now, in private, the Fianna Fáil cabinet split again, and triggered the alienation of the minister for finance Albert Reynolds, which led to his sacking by Haughey in 1991, and his ultimate revenge in February 1992 when he replaced him as taoiseach. On the PD side, the small parliamentary party of just six TDs was in disarray; there were lots of angry meetings, and many party members around the country posted in their resignations.

But the tyranny of the maths also came into play, with 77 plus six adding up to the magic 83 figure. With Haughey fearing being ousted by his own party, he now took matters into his own hands and conducted the main discussions himself with O’Malley and his negotiators, Bobby Molloy and Pat Cox, while blindsiding his own negotiators, Reynolds and Bertie Ahern. The PDs strategically focused on securing the principle of coalition, rather than external support for a minority government, as well as the principle of “no agreement until everything was agreed”.

But it took two more Dáil adjournments, on July 3rd and July 6th, to allow the tortuous process to continue, culminating in the PDs securing two cabinet seats and a junior ministry, when the new government was eventually formed on July 12th. That was 27 days after the general election!

Should today’s taoiseach and Fianna Fáil leader find themselves in this uncomfortable tangle, with maybe a 20-seat gap between them but an overall comfortable majority of around 95 seats after this weekend’s counting, the crunch negotiations will all be about the composition of the government.

Expect six to seven cabinet seats and a rotating taoiseach to be the Fianna Fáil opener. Of course, there will be opposition within both parties, from parliamentary party to local branch level. But the prospect of government is a powerful aphrodisiac for all politicians of every hue, no matter how much they might protest to the contrary.

The real trick for both party leaders will to defer the naming of their ministerial teams, senior and junior, and other trappings of office, until the overall deal is approved by both parties. A disappointed wannabe minister could be a trenchant opponent of any deal. So best to keep everyone guessing, and on their best behaviour. And, when the two party leaders assemble the chosen ones on the day of the formation of the new coalition, it will be too late for any of the many disappointed ones to foment a revolt.

Around 1pm on July 12th, 1989, when Charles Haughey was putting the final touches to the coalition deal with Des O’Malley and Bobby Molloy, and just two hours before unveiling all in the Dáil chamber, his parting shot to them was: “Nobody but myself could have done it.”

Next week, history is likely to beckon Enda Kenny and Micheál Martin to an even more seismic political challenge. Maybe in the centenary year of a rebellion that was the genesis of their separate parties, they will accept the hand of history.

Stephen O’Byrnes is a director of MKC Communications, and a former press officer and policy director of the Progressive Democrats