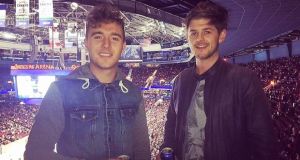 “Okay, Irish, here’s your shovel. Keep digging until you hit the bottom of the foundations of this house. It could be six, eight or 10 feet. I don’t know how deep it will be; you’re digging to find out.”

I stared at the mud below. I was soaked to the skin. Vancouver, in British Columbia, was once a rainforest. The trees are long gone, but Mother Nature has not been deterred from gracing us with downpours.

Before I went to Canada I had been expecting it to bring so many job opportunities, but this was all I could get without local work experience. Irish degrees equate to little without it. The realisation that I was at the bottom of the employment ladder hit hard.

As I dug towards the foundations the hole began to resemble a grave. It felt like a metaphor for life in western Canada. I was saturated, freezing and miserable.

Four months of this was beginning to take its toll. I had built all my hopes on the foundations of the Canadian dream, but I hadn’t expected to be digging in a millionaire’s front garden to find them.

I longed for my family and friends, the kind of emotional support structures I had convinced myself I didn’t need any more.

Vancouver was beginning to weigh heavily on me, and the idea of moving home was creeping into my mind. Returning to Ireland would have represented failure, and surrender. Moving to the other side of the world is a huge risk, and with risk can come failure. Although I think I could have lived with myself if I had failed, I couldn’t fathom the notion of giving up. I had seen the adversity that Irish people had suffered during the economic meltdown, and I think it builds a resilience that you might not even know you possess.

Irish millennials grew up during the worst recession since the 1930s. Young people receive a lot of criticism. The TV presenter Piers Morgan calls our age group the snowflake generation, for example. It’s true that we didn’t have to provide for our families during the recession, which is of course a blessing, but we grew up in a climate of survival. My family are unfortunate members of the “squeezed middle”, whom you hear mentioned when a budget is imminent but are forgotten soon after.

“Squeezed” is the wrong word for life in the recession. A child squeezes its teddy bear before it nods off. What I saw was suffocation. Mothers and fathers couldn’t give up. Any lack of fight would mean no food on the table – or, worse, no roof over the family’s heads.

So giving up on Vancouver was not an option. It is not an option for thousands of Irish people in this city who must start at the bottom. The resilience we inherited from our parents will enable us to prosper in a job market that demands grit and determination. It is what will set us apart.

Eventually I got my lucky break: an interview with a technology company in downtown Vancouver. The post would be a dream role, and it was hard to hold back the feeling that I didn’t just want this job but needed it. My future in Canada was riding on this.

After a tough interview I got a call on Christmas Eve to say I had landed the position. Spending my first Christmas away from Ireland became much less daunting.

1 German nudist chases wild boar that stole laptop at Berlin lake
2 Covid-19: One more death and 174 further cases confirmed in State
3 Irish in Australia: ‘We are in for a few hard years’
4 Gardaí cannot prosecute people who breach midlands movement restrictions
5 Meet the Bearman of Buncrana: ‘I knew about Joe Exotic for years’
6 Midlands lockdown Q&A: Firstly, is it a lockdown or not?
7 All eyes on Tenet, the spy movie with everything to prove
8 Midlands lockdown: ‘Why shut down Offaly and leave Dublin open?’
9 Inside the dog-trafficking trade: ‘After drugs, it’s guns, then pups’
10 Thousands protest against Netanyahu over Covid-19 and alleged graft
Real news has value SUBSCRIBE