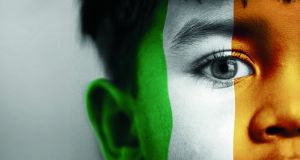 Minister for Finance Paschal Donohoe delivered a significant Budget 2020 speech last week. In a budget “without precedent” he laid out his plans to forearm the country in the event of a no-deal Brexit.

There was another milestone, says Tanya Ward, chief executive of the Children’s Rights Alliance. Unusually for an Irish Minister for Finance, Donohoe made reference to child poverty. Among his aims, he said, was be to “support the elderly and children and families at risk of poverty”.

“It was really significant to hear that,” says Ward who attributes it in part to her organisation’s collaboration since January with The Irish Times on the No Child 2020 initiative.

No Child 2020 provides a sustained focus on child welfare and children’s issues. It explores the problems facing children in Ireland today and offers solutions that would make this a better country to be a child.

“I think that shows a shift, and I think the sustained focus by No Child 2020 has helped achieve that.” The shift – albeit in small steps – she notes is towards universal services to improve children’s lot, and away from cash transfers or tax cuts.

A clear success, believes Ward, is evident in a new focus from Government on food poverty. Championed by Minister for Protection Regina Doherty, a pilot scheme providing free hot meals in 36 primary schools this academic year will be extended to another 35,000 children from September 2020.

It was her ambition, added Doherty, that this would be a universal scheme across all primary schools.

Her colleague, Minister for Children Katherine Zappone, announced another pilot scheme: free meals in 45 early-year childcare settings from next September.

Poorer families spend up to a third of their income on food, and about 10 per cent of the population lives in food poverty – unable to have an adequate and nutritious diet due to issues including affordability and accessibility.

A daily, free, hot and nutritious school meal is a proven intervention in tackling child poverty. It benefits a child physically, emotionally and educationally, while hugely assisting parents who are under financial and time pressure.

The pilot schemes will be enormously beneficial to the children who get them, but there is some way to go to extend them to 500,000 children in primary schools and 330,000 in early years’ settings.

A further consideration will, in time, be that free meals are envisaged only on school days. In other countries, including Finland, parts of Scotland and some of the United States local authorities provide free meals to children during weekends and holidays, to protect against “holiday hunger”.

A second area of success, again attributed to dogged campaigning by Barnardos and a focus of No Child 2020, was in free school books. Just over €1 million has been allocated for a pilot free-books scheme.

Credit unions report many families getting into debt with back-to-school costs. For books alone the average cost per primary school child is €95 annually.

In healthcare, small steps towards universal, free services were taken. Free GP care is to be expanded to children under the age of eight and free dental care will be provided to children under six, though there was disappointment that eligibility for medical cards was not extended to more low-income families.

In housing, despite a commitment to build 11,000 new social housing units next year, the situation seems to get only worse. Shocking child homelessness figures illustrate the deteriorating picture for too many children.

While in December 2014 – the year the housing crisis began – there were 880 children in emergency accommodation, the most recent data shows that in August 2019 there were 3,848 – a 337 per cent increase. And disappointingly there remains no sign that Government will legislate to ensure housing policies – particularly around homelessness – are child-centred.

The project’s ask that all under-18s or their parents be provided with a “culture card” to access arts or cultural experiences, was not mentioned in the budget. Though a Creative Schools project, being piloted in 150 schools to increase children’s access to the arts is welcome, it is missing thousands of children whose lives, culturally and artistically, are non-existent.

The new National Childcare Scheme is offering more supports from next September, though lone parents who need after-school care may lose out after 2021.

Overall, say child advocates, Budget 2020 marks a shift in the right direction – from a very low base. Ireland has been an outlier, says Ward, in not providing such universal schemes as free hot meals, school-books and healthcare to children as a rational investment in their and their society’s futures.

These, combined with targeted supports to the poorest families, are not only the most effective means of tackling child poverty but also the most politically acceptable, as every family with children benefits.

Suzanne Connolly, chief executive of Barnardos, echoed Ward’s overview. Much in the budget was going “in the right direction”, she said. “Subsequent budgets must continue in this vein in order to have the desired impact on ensuring child poverty is eradicated.”

The most recent poll by Ipsos/MRBI on behalf of The Irish Times asked two questions inspired by the No Child 2020 project.

Asked about risks to the wellbeing of children in Ireland, respondents identified homelessness as the biggest risk. Other risks mentioned included a negative family environment, bullying, and the viewing of inappropriate content on the internet.