Opposition leader has been backed by US president Donald Trump 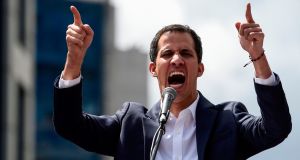 Until very recently, Juan Guaidó, the 35-year-old leader of Venezuela’s opposition-controlled national assembly, was an unknown figure on the international stage.

That changed on Wednesday, when the young politician stood before thousands of protesters in Caracas and swore himself in as interim president – a move that was immediately greeted by the US and Canadian governments.

Guaidó first signalled that he was willing to mount a serious challenge to the country’s president in early January when Nicolás Maduro, began his second term of office following elections last summer that were widely denounced as fraudulent.

The inauguration was met with a chorus of international disapproval, and Guaidó, just six days into his post, told the world he was ready to assume the presidency until free and fair elections could be held – provided he had the vital support of the military.

His announcement was a rare open challenge to Maduro’s rule, and won support from the head of the Organisation of American States – but also prompted fears it could provoke a fresh crackdown on the opposition.

Maduro, who has overseen deepening economic and political turmoil, made light of his relatively inexperienced challenger.

“A lot of people in Venezuela are going to ask what is this ‘Guaidó’?” he joked in a Friday night TV address. But days later, Guaidó was briefly detained by the intelligence services – something Maduro’s administration blamed on rogue operatives.

“Look what they are doing,” Guaidó told a rally of supporters following his release. “They are desperate in [the presidential palace] Miraflores . . . We are survivors, not victims!”

Raised in La Guaira, a port city 20 miles from Caracas, Guaidó cut his political teeth during 2007 student protests against Maduro’s late predecessor Hugo Chávez, who was then seeking to consolidate power.

Venezuela’s president Nicolás Maduro after receiving the presidential sash during the ceremonial swearing-in for his second presidential term on January 10th.

Chávez put various constitutional amendments, including the abolition of presidential term limits and the ability to unilaterally declare a national emergency, to a public referendum. But the vote handed Chávez his only electoral defeat in a nine-year presidency, and emboldened a nascent opposition movement, including Guaidó’s charismatic but divisive mentor Leopoldo López, who has been under house arrest and barred from political office since early 2014.

It was López who tapped Guaidó, 12 years his junior, to lead his Popular Will party’s coalition in the national assembly when its mandate began on January 5th.

Guaidó had just finished his first full term as a legislator, having been elected in 2015. “Guaidó is a fighter and an eternal optimist . . . he’s humble and sincere,” said Freddy Guevara, an opposition leader and friend of Guaidó, in a telephone call from the Chilean ambassador’s residence in Caracas, where he is seeking asylum.

“He gets along with everyone and doesn’t have the typical profile of a politician.”

Many in Venezuela thought Maduro had successfully neutered the assembly in 2017, when he sidelined it in favour of a more pliant constituent assembly via elections which were also widely labelled a sham. López, was one of the opposition’s most radical and confrontational leaders, but few had expected his protege Guaidó to mount such a brazen challenge to Maduro.

“He was incredibly brave and now runs risks that he’ll be jailed, tortured or need to go into exile,” said David Smolansky, an opposition leader, who was also forced to flee Venezuela and is now living in the US.

“However, he decided to go ahead. He’s part of my generation; a brave generation that grew up under a dictatorship.”

Guaidó is no stranger to adversity. His family survived a devastating landslide in his hometown in 1999 that killed as many as 30,000 people, and he claims to bear scars on his neck from rubber bullets fired at protesters in 2017 in Caracas.

On Wednesday, he told the crowd he new he was taking a potentially risky step. “We know that this will have consequences,” he told supporters. “To be able to achieve this task and to re-establish the constitution we need the agreement of all Venezuelans.” – Guardian