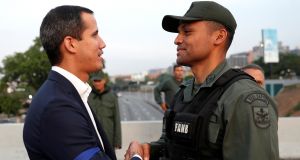 Venezuelan opposition leader Juan Guaidó has taken to the streets to issue a bold call for a nationwide uprising to oust Nicolás Maduro, counting on military support to topple the crisis-stricken country’s socialist leader.

Dozens of armed men in military uniform accompanying Mr Guaidó exchanged gunfire with soldiers supporting Mr Maduro on Tuesday, as crowds of people converged on La Carlota military base in central Caracas where Mr Guaidó made the announcement.

They tried to push their way in but were repelled. Many later moved to Plaza Altamira in eastern Caracas, a traditional seat of opposition activity.

In his trademark dark suit and white shirt, Mr Guaidó stood on top of a car and addressed the crowd via a megaphone. He called on Venezuelans to “come to Altamira. Here we will resist. Operation Liberty has begun”.

Supporters, who included uniformed members of the Venezuelan security forces, responded by chanting: “Yes, we can!”

The unrest is the latest manifestation of a three-month push for Venezuela’s Assembly, and says that the constitution has been usurped by Mr Maduro following elections last year that were widely considered illegitimate.

In response, Mr Maduro published a tweet calling on the people of Venezuela to have “nerves of steel” and asking pro-regime militias to gather outside the Miraflores presidential palace.

Mr Maduro, who did not appear in public, said he had spoken to military units around the country “who have expressed their total loyalty to the people, to the constitution and to the fatherland”.

As events unfolded senior US officials threw their weight behind Mr Guaidó. Tweets from Mike Pence, the US vice-president, Mike Pompeo, secretary of state, and John Bolton, national security adviser, welcomed Mr Guaidó’s call for the military to turn on the government.

“We are with you!” Mr Pence tweeted. “America will stand with you until freedom & democracy are restored.”

I am monitoring the situation in Venezuela very closely. The United States stands with the People of Venezuela and their Freedom!

To @jguaido, the National Assembly and all the freedom-loving people of Venezuela who are taking to the streets today in #operacionlibertad—Estamos con ustedes! We are with you! America will stand with you until freedom & democracy are restored. Vayan con dios! #FreeVenezuela

Russia accused opponents of Mr Maduro of inciting violence and called for the international community to help calm the situation.

Live TV pictures showed La Carlota military base surrounded by thousands of people. Most were calm, although scores of protesters threw rocks and Molotov cocktails at officers guarding the base, who responded with tear gas and drove armoured cars around the perimeter fence.

Inside the base, members of the security forces could be seen marching across the Tarmac carrying riot shields and, behind La Carlota, plumes of black smoke rose into the air.

Social media was also ablaze with local reports across the country of Venezuelans taking to the streets and of a strong security presence around government buildings.

One showed the feared Faes, or special police unit, clashing with protesters in the provincial town of Barquisimeto. Others showed tear gas filling the streets of central Caracas.

The day’s pell-mell events started at dawn in a video posted by Mr Guaidó on Twitter in which he said he had started the “final phase” of his campaign to topple Mr Maduro and called on the military to back him and end the “usurpation”.

Rocío San Miguel, an expert on Venezuela’s army – which has hitherto remained loyal to Mr Maduro – said it was still too early to tell what kind of support either Mr Guaidó or Mr Maduro could count on from the military’s upper ranks. But there were “no signs of fracture in the important units”, she tweeted.

There was confusion about the role of Gen José Ornelas Ferreira, chief of the armed forces general staff, and whether he had given his support to Mr Guaidó. It was also unclear whether the opposition leader had secured backing from sections of the Sebin intelligence forces who had been guarding activist Leopoldo Lopez under house arrest. Mr López was seen with Mr Guaidó on Tuesday morning.

Gen Ornelas was close to Hugo Chávez and took part with him in a failed 1992 coup attempt in which he helped take La Carlota base. He became commander of Chávez’s presidential guard during the past two years of the late president’s life, and was made a major general by Mr Maduro in 2016.

However, a mid-morning tweet from Gen Ornelas’s account seemed to counter the notion that he was rebelling. Pledging his “absolute loyalty”, he said the army “would DEFEAT whoever seeks to break the peace of the Republic”.

Diosdado Cabello, the powerful number two of the ruling party, described Mr Guaidó and his backers as “traitors” and said they would never set foot inside the Miraflores presidential palace. “Everyone will have to take responsibility for their actions and we will take ours,” he said, speaking to a crowd of red-shirted supporters in central Caracas.

Dividing the military has been central to the strategy of the opposition, which is backed by the US and more than 50 other countries. But Mr Maduro’s intelligence forces, advised by Cuban security, have kept a tight grip on barrack discipline. Potential coup leaders have been quickly identified and imprisoned even as food shortages and galloping hyperinflation have led to a steady stream of defections by lesser rank and file.

On Tuesday, a video of a young soldier wearing a blue bandanna around his face told television reporters that the unrest would continue “until Maduro falls”. But Gen Vladimir Padrino, the defence minister, said all major barracks were calm.

Brent crude prices rose more than 1.2 per cent to a high of $73.27 (€65.31) amid investor concerns that Venezuelan producers, already hobbled by unrest and mismanagement, could see output interrupted even further. Many traders already believe global oil supplies are tight due to US sanctions on Iran and pipeline problems in Russia.

The White House said it was “monitoring the ongoing situation” and that US president Donald Trump had been briefed. Brazil’s president, Jair Bolsonaro, also tweeted support for Mr Guaidó. But Russia’s foreign ministry said the opposition had “once again turned to violent methods of confrontation”.

Moscow has been one of Mr Maduro’s biggest foreign supporters. Russia is owed billions of dollars by his regime and owns a number of oilfields in the country. “We urge that violence be renounced,” the ministry said. “The problems facing Venezuela should be resolved through a responsible negotiation process ... without destructive external interference.”

Mexico, which has stood out among Latin American countries by refusing to endorse Mr Guaidó, said it was monitoring developments. – Copyright The Financial Times Limited 2019