Venezuela’s opposition leader Juan Guaidó says he will hold talks on Monday with international allies about how to respond to the weekend’s refusal to let aid convoys into the country. Video: New York Times 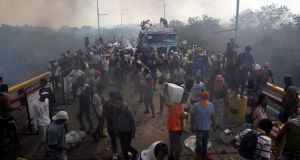 Venezuela’s opposition leader Juan Guaidó says he will hold talks on Monday with international allies about how to respond to the weekend’s refusal by troops loyal to president Nicolás Maduro to let aid convoys into the country. This has ratcheted up the already tense standoff in the crisis-stricken South American country.

There were violent confrontations on Saturday on Venezuela’s borders with Colombia and Brazil as the opposition’s plans to run tonnes of humanitarian supplies into the country were frustrated by massed ranks of Venezuelan security forces.

Responding on Sunday, US secretary of state Mike Pompeo described Mr Maduro as a “sick tyrant” for blocking the aid, and warned the US would “take action against those who oppose the peaceful restoration of democracy in Venezuela”.

At least four people died over the weekend in confrontations on Venezuela’s border with Brazil where one aid convoy attempted to enter, while two aid trucks caught fire at the border with Colombia where the main opposition effort was focused.

Opposition activists also circulated footage on social media of what they said were pro-Chavista militias firing live ammunition in towns near the Colombian border in an effort to prevent residents mobilising to receive the aid.

More than 60 Venezuelan military personnel stationed on the frontier with Colombia deserted rather than obey orders to block the aid’s entry.

Footage of the standoff showed some soldiers crying as protesters asked them to think of their families and let the convoy in.

However, overall military discipline held, and the aid convoys and their escorts of opposition supporters were turned back by troops firing tear gas and rubber bullets. This suggests efforts by Washington to break the morale of the Venezuelan high command by threatening military intervention should Mr Maduro cling on to power have so far failed.

Mr Guaidó, who declared himself interim president last month and has been recognised by more than 50 countries, had said the aid operation was to bring relief to 300,000 people he claims are at risk of death because of the collapse of the country’s economy.

In recent years over three million people have fled hunger and increasing lawlessness in Venezuela as the populist “Bolivarian Revolution” of Hugo Chávez has descended into economic chaos and dictatorship under Mr Maduro, who succeeded him in 2013.

He dismissed the aid effort as a “show” designed to create a pretext for US military intervention. On Saturday, he ordered the breaking off of all diplomatic relations with Colombia’s “fascist government”because of its assistance for Mr Guaidó’s aid effort.

Responding to the weekend’s setback on Twitter, Mr Guaidó said the incidents “obliged” him to go to the international community and formally propose “that we must keep open all options to achieve the liberation of our country”.

US president Donald Trump said last week “all option are on the table” when it comes to Venezuela, but others regional players, including Brazil’s military, are wary of any option involving force.

On Saturday, US national security adviser John Bolton said Venezuela could now “face even more sanctions and isolation” should its military refuse to break with Mr Maduro. Washington imposed crippling sanctions on Venezuela’s oil industry last month in an effort to choke off one of Mr Maduro’s last sources of hard currency.

US vice-president Mike Pence is due to arrive in Bogotá on Monday for a meeting of the ad hoc Lima Group of western hemisphere states, which was formed to seek a resolution to the crisis but is now backing Mr Guaidó, with officials suggesting new measures against Caracas could be agreed at the meeting.