US calls for release of Roberto Morrero, says they will hold those responsible ‘accountable’ 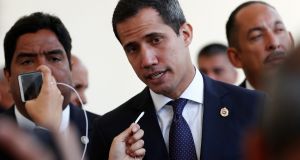 Venezuelan opposition leader Juan Guaidó said on Thursday that intelligence agents had detained his chief of staff following a pre-dawn raid, signalling that president Nicolás Maduro may be cracking down on the opposition’s challenge to his rule.

US secretary of state Mike Pompeo, in a post on Twitter on Thursday, called for Roberto Marrero’s immediate release and said “we will hold accountable those involved”.

The US has repeatedly warned Mr Maduro not to move against Mr Guaidó.

Mr Guaidó invoked the constitution in January to assume the interim presidency after declaring Mr Maduro’s 2018 re-election a fraud, and has been recognized by dozens of Western nations as the country’s legitimate leader.

Mr Maduro, who has overseen a dramatic collapse of the OPEC nation’s economy, has called Mr Guaidó a puppet of the US and said he should “face justice,” but has not explicitly ordered his arrest.

“They have kidnapped @Robertomarrero, my chief of staff,” Mr Guaidó said in a post on Twitter, adding the Caracas residences of Mr Marrero and opposition legislator Sergio Vergara had been raided before dawn. “We do not know their whereabouts. They should be freed immediately.”

The United States condemns raids by Maduro’s security services and detention of Roberto Marrero, Chief of Staff to Interim President @jguaido. We call for his immediate release. We will hold accountable those involved.

“Look after the president,” Mr Marrero said in a voice message sent to reporters by Mr Guaidó’s press team, as he reported that agents were trying to enter his house. The press team also sent a video of another opposition lawmaker showing damage to the door of Mr Marrero’s home and a broken lock.

Venezuela’s information ministry did not immediately respond to a request for comment.

Dozens of countries including the US, major European powers and most South American nations have backed Mr Guaidó and say Mr Maduro’s rule is illegitimate.

Mr Maduro says his government is the victim of an “economic war” led by his political adversaries and blames US financial and oil sector sanctions for the country’s situation.

Mr Guaidó travelled around South America in February to drum up diplomatic support for his government, defying a travel ban imposed by the pro-government supreme court. He later entered the country via Venezuela’s principal airport without being detained by immigration officials.

UN human rights chief Michelle Bachelet said on Wednesday that Venezuelan security forces, backed by pro-government militias, have quashed peaceful protests with the excessive use of force, killings and torture.

Venezuela is reeling from annual inflation topping 2 million per cent, which has fuelled malnutrition and preventable disease and spurred an exodus of more than 3 million citizens in since 2015. – Reuters