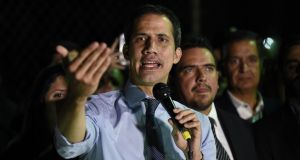 Juan Guaidó, president of Venezuela’s National Assembly and self-declared interim president. “We are not going to evade our responsibility,” he said. Photograph: Carlos Becerra/Bloomberg

Venezuela’s Constituent Assembly, an all-powerful legislature controlled by the ruling Socialist Party, on Tuesday approved a measure allowing for a trial of opposition leader Juan Guaidó, in what appeared to be step towards having him arrested.

He has been recognised by the United States and most other western nations as Venezuela’s legitimate leader, and has said he does not recognise decisions emanating from the Maduro government.

The Constituent Assembly’s decree is necessary for the supreme court to move ahead with a trial of Mr Guaidó because as a legislator he has parliamentary immunity that makes it more difficult for him to be tried than the average citizen.

“This formally authorises the continuation of the trial [of Guaidó],” said Constituent Assembly chief Diosdado Cabello, who is also the vice-president of the Socialist Party.

The supreme court on Monday had reiterated a previous measure blocking Mr Guaidó from leaving the country, an order which he openly violated in February when he embarked on a tour of Latin American nations to bolster support for his campaign to oust Venezuelan president Nicolas Maduro.

Venezuela’s chief prosecutor’s office has opened an investigation of Mr Guaidó, into alleged links to “incidents of violence” in January, but has not ordered his detention or officially charged him with any crime.

“We are not going to evade our responsibility,” Mr Guaidó told reporters in eastern Caracas after the announcement. “They thought this would be easy. But it won’t be. If they want to move forward, they will have to assume the consequences.”

Constitutional lawyer Jose Vicente Haro called the decision a “constitutional fraud” that stripped Mr Guaidó of parliamentary immunity without the approval of the legislature, which under the constitution must approve such a decision.

The legislature is currently control by the opposition.

“It also violated due process, because he should have had a hearing to defend himself,” said Mr Haro in a telephone interview.

Mr Maduro has said Mr Guaidó should “face justice” and calls him a coup-mongering puppet for the United States – but he has stopped short of calling for his arrest.

Mr Guaidó’s international backers, chiefly the Trump administration, have warned Venezuelan authorities not to touch him and threatened ever harsher sanctions against the Maduro administration to further cut it off from foreign financing. – Reuters