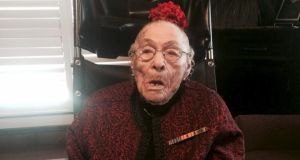 Gertrude Weaver, who has died at the age of 116, is pictured Camden, Arkansas. Photograph: Reuters/Silver Oaks Health and Rehabilitation Facility/Handout

Gertrude Weaver, who last week became the world’s oldest-known living person, has died at the age of 116 at a senior care facility in Arkansas, officials said on Monday.

Weaver, who said the key to longevity was to treat people kindly, basked in her brief moment in the global spotlight. She enjoyed being read news articles about being the oldest person on the planet, said Kathy Langley, the administrator of the Silver Oaks Health and Rehabilitation Centre in Camden, Arkansas.

“She certainly enjoyed it,” Ms Langley said, adding, “we are devastated by her loss.”

Langley was born on July 4th, 1898, according to the Gerontology Research Group, which validates ages of the world’s longest-living people. There are only three people alive on the planet with birth records showing they were born before 1900, according to the group.

The daughter of sharecroppers, Ms Weaver was born in Arkansas near the Texas border and worked as a domestic helper.

The world’s oldest known person is now Jeralean Talley, who was born on May 23rd, 1899 and will turn 116 next month, according to the group.

Ms Talley who lives in the Detroit suburb of Inkster, credits her faith for her longevity.

“It’s the Lord. Everything is in his hands,” she said in an interview last year at the one-story brick home she shares with her daughter, Thelma Holloway.

Ms Talley bowled until she was 104. She never smoked or drank alcohol and her only surgery was to have her tonsils removed, she said.

Misao Okawa, a Japanese woman who credited her longevity to “eating delicious things,” had been the world’s oldest living person until her death on April 1st at the age of 117.