Dr Jill Stein, who ran as a candidate for the Green Party in the recent US election, explains her reasoning for requesting a recount in three states. Video: Facebook/Dr Jill Stein 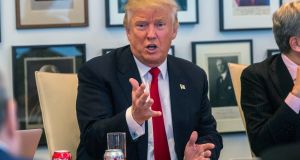 There has been no evidence of widespread election fraud in the November 8th US presidential contest, the White House said on Monday, following president-elect Donald Trump‘s tweet over the weekend alleging that there had been millions of illegal votes and voter fraud in three states.

Speaking to reporters at a daily briefing, White House spokesman Josh Earnest, deferred comments on Mr Trump’s specific tweets to the president-elect‘s team, but added: “What I can say, as an objective fact, is that there has been no evidence produced to substantiate a claim like that.”

Mr Trump had claimed without evidence that “millions” voted illegally in the presidential election and that it was rigged against him, even as he prepares to enter the White House.

The president-elect scoffed at his rival Hillary Clinton’s near two million-lead in the popular vote, as he attacked efforts to force recounts in three key battleground states.

The billionaire tycoon and his lieutenants called the recount push the work of “crybabies” and “sad”.

He launched a Twitter offensive that lasted more than 12 hours on Sunday, casting a shadow over the legitimacy of an election that he actually won.

“I won the popular vote if you deduct the millions of people who voted illegally,” he tweeted in the afternoon, before alleging in an evening tweet that there had been “serious voter fraud in Virginia, New Hampshire and California”.

There has been no indication of widespread vote manipulation, illegal voting or hacking that materially affected the outcome one way or the other.

It is that very lack of evidence that suggests Mr Trump is likely to prevail in recounts.

Mr Trump also tweeted part of Ms Clinton’s concession speech, when she told supporters they must accept that “Donald Trump is going to be our president”.

Serious voter fraud in Virginia, New Hampshire and California - so why isn't the media reporting on this? Serious bias - big problem!

states instead of the 15 states that I visited. I would have won even more easily and convincingly (but smaller states are forgotten)!

In addition to winning the Electoral College in a landslide, I won the popular vote if you deduct the millions of people who voted illegally

Meanwhile, Mr Trump will meet with retired US general David Petraeus on Monday as he considers him to serve as US secretary of state, Bloomberg reported, citing a senior official with Mr Trump’s transition team.

Petraeus, a former CIA director who resigned in 2012 after it emerged he had an extra-marital affair, has indicated that he would serve in Mr Trump’s administration if asked.

Mr Trump had already described as a “scam” the efforts by Green Party nominee Jill Stein to revisit the vote count in Wisconsin, Michigan and Pennsylvania.

Mr Trump won Wisconsin and Pennsylvania, and as of Wednesday, held a lead of almost 11,000 votes in Michigan, with the results awaiting state certification on Monday. His Michigan margin was a tiny 0.22 per cent of the state’s votes.

She could conceivably tip the electoral balance in the remote event that all switched to her in recounts.

Mr Trump was mostly silent on the recount effort until it became known that Ms Clinton would join it, at least in Wisconsin.

On Saturday, a day after Wisconsin officials said they would conduct the first presidential recount in the state’s history, Ms Clinton’s campaign lawyer Marc Elias said: “We intend to participate in order to ensure the process proceeds in a manner that is fair to all sides.”

He said Ms Clinton would take the same approach in Pennsylvania and Michigan if Ms Stein were to follow through with recount requests in those states.

This provoked Donald Trump to respond.

“Hillary Clinton conceded the election when she called me just prior to the victory speech and after the results were in,” Mr Trump tweeted on Sunday. “Nothing will change.”

Senior Trump adviser Kellyanne Conway then said Ms Stein, “the Hillary people” and others supporting recounts have to decide whether they are going to back a peaceful transition “or if they’re going to be a bunch of cry babies and sore losers about an election that they can’t turn around”.

Ms Conway also attacked the prospect of her boss making Mitt Romney his secretary of state, after friction during the election between Mr Trump and the 2012 Republican Party nominee.

Trump supporters “feel a bit betrayed that you can get a Romney back in there after everything he did”, she said.

“We don’t even know if he voted for Donald Trump. He and his consultants were nothing but awful to Donald Trump for a year.”

Ms Conway said she was “reflecting what the grassroots are saying” adding: “I’m all for party unity, but I’m not sure we have to pay for that with the secretary of state position.”