Police in Portland, Oregon arrested at least 13 people as a right-wing group marched to a downtown waterfront park and anti-fascist counter-protesters scuffled with officers who tried to keep the two sides apart. Video: Reuters 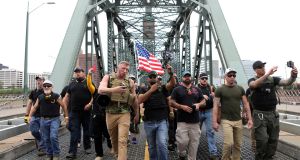 Members of the Proud Boys and their supporters march during a rally in Portland, Oregon, on Saturday. Photograph: Jim Urquhart/Reuters

Portland saw its largest far-right demonstration of the Trump era on Saturday, as 500 right-wingers travelled from around the United States to march back and forth across the Oregon city’s bridges and briefly occupy a patch of its waterfront.

By making extensive accommodations for the unpermitted right-wing protest, including close police escorts, concrete barriers and reopening a bridge to allow them to leave the downtown area, Portland authorities succeeded in preventing head-on confrontations between it and a much larger counter-protest.

In a statement after the rally, the Proud Boys chairman Enrique Tarrio appeared to be promising to hold the city to ransom. On the group’s Telegram channel, a link was sent out to a Gateway Pundit story that quoted the chairman promising to come to Portland once a month, and saying: “Sooner or later, [Portland mayor Ted Wheeler] will run out of money and his counterparts in government will no longer take him seriously. The path forward for Mayor Wheeler is simple, free your city from the grip of Antifa, take direct and meaningful action.”

On Saturday, there was sporadic violence later in the day, and police declared a civil disturbance in trying to remove a group of mainly left-wing protesters blocking streets near the city’s central square. Elements of the counterprotest remained downtown for more than three hours after the departure of right-wing demonstrators.

Police said they made 13 arrests, and seized weapons throughout the day.

President Donald Trump put pressure on city authorities early in the day with a characteristically explosive tweet. “Major consideration is being given to naming ANTIFA an ‘ORGANIZATION OF TERROR’,” the president wrote from his golf club in Bedminster, New Jersey, on Saturday morning. “Portland is being watched very closely. Hopefully the Mayor will be able to properly do his job!”

Speaking to CNN, Portland’s mayor said of Trump’s tweet: “Frankly, it’s not helpful. This is a potentially dangerous and volatile situation, and adding to that noise doesn’t do anything to support or help the efforts that are going on here in Portland.”

At 10am a small group of protesters from the right-wing group Portland’s Liberation made their way through the area, without incident.

At 11am, a much larger group of about 500 right-wing protesters, mostly in Proud Boys colours, marched west across Morrison bridge and into the waterfront area, led by combat veteran and conspiracy broadcaster Joe Biggs, and Tarrio.

Police closed the main street parallel to the Willamette river and enforced a barrier about the size of a city block between the marchers and counter-protesters, using concrete barricades and lines of riot police.

When the Proud Boys arrived in the park, they knelt in prayer and sang the US anthem.

They spent just over half an hour on the city’s west side. The atmosphere was frequently tense. Six counter-protesters who managed to enter the protected enclosure were engaged in heated discussion by a large group of right-wingers. Men in masks emblazoned with American flags anxiously monitored the fringes of the group for “antifa” infiltrators.

Tarrio gave a speech in the park, in which he said of the mayor: “He’s wasted police time, so we’re going to waste his resources today. In true Proud Boy fashion, we’re going to go to a secondary location.”

Just after 11.30am, the marchers started back over Hawthorne bridge, travelling east. Until then the bridge had been closed to traffic. “They opened the bridge just for us,” Tarrio told marchers through a bullhorn.

After crossing the river, the crowd milled around in the parking lot of a fire and rescue installation, under the I-5 freeway. The main group of right-wingers gradually dispersed.

A diverse counter-protest had been waiting for the group. Beginning at 9.30am, the protest featured Buddhist and Jewish prayers, speeches, a poop emoji costume parade organised by the PopMob group, and music.

Around 10am, Ed Mondaine, of the Portland chapter of the National Association for the Advancement of Colored People, addressed the crowd, saying: “It’s time to stand up and annihilate bigotry.”

He called upon white allies to help with “fighting white nationalism” in “one of the whitest cities in America”, and concluded by leading a civil rights song, Ain’t Gonna Let Nobody Turn Me Around.

The counter-protest also included a large group of masked antifascist protesters in “black bloc” attire. “Antifa” protesters of this kind were a focus of the right, and the protest was framed as a response to an incident at a previous rally on June 29th, when conservative writer Andy Ngo was milkshaked and punched by unidentified black bloc protesters.

“Antifa” is a collective term for a loose affiliation of anti-fascist groups. Such counter-protesters have clashed with far-right activists in the Oregon city throughout the Trump era, some wearing black bloc attire and face masks.

Several incidents took place after the main body of right-wingers left the city. According to reporters on the west side of the Willamette river, a school bus similar to one used by the right-wing Proud Boys group at previous events had its windows smashed and was pepper-sprayed by anti-fascists.

Video and photos of the incident appeared to show an occupant of the bus wielding a hammer which was then seized by an antifascist.

John Turano, also known as “Based Spartan”, and a familiar figure at right-wing rallies on the west coast in recent years, was seen on the east side arguing with other right-wingers about leaving, saying: “Antifa are over there.” Video showed Turano and his daughter later being driven out of the west side downtown area by a large crowd of counter-protesters.

Videos appearing to show other altercations were posted to social media.

Elsewhere, a familiar game of cat and mouse played out between police and counter-protesters on the east side of the river in the early afternoon, after some protesters marched over Burnside bridge. Police on bikes or armoured cars followed as they hived off into smaller groups and dispersed. At least one arrest was made there, when police pulled a protester off their bicycle and cuffed them.

On the west side of the water, long-time right-wing protest leader Joey Gibson performed a lone last act in downtown Portland. A large group of counter-protesters followed him as he walked along through the streets of Old Town, chanting: “Nazis go home.” After several heated interactions with his antagonists, Gibson was whisked away by three men in a gold-coloured Subaru.

Gibson had been at the centre of events the previous day. He turned himself in to city authorities on an arrest warrant for a riot charge that he said was “without a doubt an assault on the first amendment”. “I have never been violent,” he said.

The 35-year-old is one of six men associated with right-wing rallies in the city to be arrested or charged since August 7th, relating to a violent incident on May 1st at Cider Riot, a bar favoured by the left.

Gibson claimed the charges were “completely political. This is Ted Wheeler doing everything he can because he’s been caught.” He accused Wheeler, a Democrat, of co-ordinating with and protecting anti-fascist demonstrators, a refrain in his speeches since 2017.

After being bailed out of Multnomah county jail overnight, he was present all day on Saturday, waving a large American flag.

Gibson has organised protests in Portland under the banner of the organisation he founded, Patriot Prayer. Several have become violent. Critics have pointed to the presence at times of members of white nationalist groups such as Identity Evropa and the PDX Stormers. But above all, the events have been characterised by the presence of the Proud Boys.

During their brief stay in the park, Tarrio promised the group would continue return to Portland “every month”. – Guardian

1 Covid-19: Government set to reject advice and approve reopening of gastropubs and restaurants
2 Businesses can show ‘Dunkirk spirit’ by taking new direct ferry to France
3 Miriam Lord: Helen McEntee holds up well for someone with barely a leg to stand on
4 Exiting Level 5: What will reopen, when will it happen and when will we know?
5 School at centre of major Covid-19 outbreak unaware of case for days
Real news has value SUBSCRIBE