US president’s support strongest among white evangelicals, Protestants and Catholics 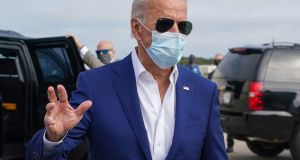 White Christians in the US continue to favour President Donald Trump over rival Joe Biden for election on November 3rd, according to a new poll. It found that 52 per cent of white Catholics said they would vote for Mr Trump, as opposed to 44 per cent for Mr Biden, giving the president an 8 per cent lead among this group.

Conducted by the Washington-based Pew Research Centre, the poll of 10,543 registered voters across the US was taken between September 30th and October 5th – the day Mr Trump was discharged from hospital having been treated for Covid-19.

By contrast this latest poll showed that 90 per cent of black Protestant registered voters, 70 per cent of Jews and 67 per cent of Hispanic Catholics would vote for Mr Biden on November 3rd. These figures for Biden are similar to findings in that early August poll.

Mr Biden is also the preferred candidate among people without a religious affiliation, with 83 per cent of atheists/agnostics, and 62 per cent of people who describe their religion as “nothing in particular” saying they would vote for him. These groups’ support for Mr Biden is again on par with that indicated last August.

White evangelical Protestants remain Mr Trump’s strongest supporters with 72 per cent saying he did a good job in that poll last August. They were not asked in this more recent one. That August finding was identical to his approval rating among this group three years ago in summer 2017.