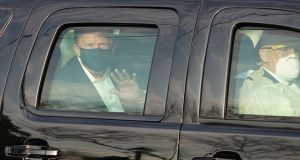 US president Donald Trump waves from the back of a car in a motorcade outside of Walter Reed Medical Center in Bethesda, Maryland on Ocotber 4th, 2020. Photograph: Alex Edelman/AFP via Getty Images

US president Donald Trump left the Walter Reed Medical Centre by car to wave to supporters gathered outside on Sunday evening, despite continuing to receive treatment for Covid-19.

In an unannounced move, Mr Trump travelled outside the hospital in a convoy of SUVs to see supporters who have gathered outside the facility in the District of Columbia since Friday. Several ran alongside the motorcade as he passed.

The area around the hospital was closed down with several secret service agents lining the highway.

White House spokesman Judd Deere confirmed that Mr Trump had returned to the hospital, after the brief drive-by, where he spent his third night.

“President Trump took a short, last-minute motorcade ride to wave to his supporters outside and has now returned to the Presidential Suite inside Walter Reed,” he said.

Dr James Phillips, a professor of emergency medicine at George Washington University, said Mr Trump put others at risk during the car trip on Sunday.

“That Presidential SUV is not only bulletproof, but hermetically sealed against chemical attack. The risk of Covid-19 transmission inside is as high as it gets outside of medical procedures. The irresponsibility is astounding,” he tweeted.

Mr Deere said later that “appropriate precautions were taken in the execution of this movement to protect the president and all those supporting it, including

PPE. The movement was cleared by the medical team as safe to do.” A spokesperson for the US Secret Service said protocols had been followed for the safety of the service’s personnel who protect the president.

#Trump has left Walter Reed hospital for a drive-by to wave at his supporters outside... pic.twitter.com/rwRIRXDWuA

Mr Trump also said he had been meeting soldiers and first responders - drawing criticism that he might be exposing more Americans to infection. He was diagnosed with the disease shortly after appearing at a New Jersey fundraiser on Thursday.

In a video tweeted by the president as he left the hospital, Mr Trump hinted that a “surprise” visit was imminent.

Paying tribute to the staff at the hospital in a pre-recorded message, Mr Trump said he planned to “pay a little surprise to some of the great patriots that we have out on the street, and they’ve been out there for a long time, and they’ve got Trump flags, and they love our country. I’m not telling anybody but you, but I’m about to make a little surprise visit.”

Mr Trump said: “When I look at the enthusiasm… we have more enthusiasm than maybe anybody.”

He said it had been “a very interesting journey”, and he had “learned a lot about Covid.”

“I learned it by really going to school. This is the real school, this isn’t the ‘read the book’ school, and I get it, and I understand it and it’s a very interesting thing. And I’m going to be letting you know about it. In the meantime we love the USA.”

Earlier in the day, Mr Trump’s medical team confirmed that he had been given supplementary oxygen for an hour on Friday and that his oxygen levels had dipped on Friday and Saturday.

The US president has also been treated with the steroid dexamethasone which is typically used in severe cases of Covid-19. This is in addition to a five-day course of remdesivir and an antibody cocktail by Regeneron, which he was administered on Friday. Nonetheless, they also said that he could be discharged from hospital on Monday.

Speaking outside the Maryland hospital, White House physician Sean Conley said the president had “continued to improve,” though he declined to answer some questions, including about Mr Trump’s lung scans.

The latest update on Mr Trump’s health came after a day of mixed messages from the White House. During his briefing on Saturday morning, Dr Conley said it had been 72 hours since the president’s diagnosis – suggesting a different time-line than was publicly known. He then issued a clarification stating that he used the term “72 hours” rather than “third day.”

White House chief of staff Mark Meadows also struck a more negative note in comments to the press shortly after the first medical briefing, raising concerns that the president’s condition was worse than the medical team had indicated.

Asked on Sunday who the public should believe – Dr Conley or Mr Meadows – Dr Conley said he had been trying to reflect an “upbeat attitude.”

In addition, former governor Chris Christie, who helped prepare Mr Trump for Tuesday night’s debate in the White House, announced on Saturday he had contracted the virus.