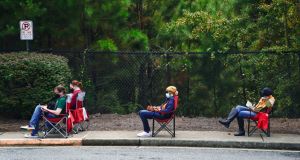 There are at least 70,000 people living in Ireland today who are eligible to vote in this year’s US presidential election contest between Donald Trump and Joe Biden. The candidates could not be more different. Yet, if historic trends are a guide, fewer than 7 per cent of these eligible voters will cast a ballot in this all important election which has global implications, especially in the country where they now reside.

Laws and regulations concerning voting rights in the US are a combination of federal and state pronouncements, but you can find everything that you need to know about these laws at VoteFromAbroad.org, where a help desk is available 24/7 to answer any specific questions that you might have. The people at VoteFromAbroad.org want to help you get registered, get your ballot, and vote. Many states now permit some people living outside of the US to vote by email.

It is estimated that 6.5 million eligible America voters live outside of the US. This constituency, if it were one of the 50 states, would be the 13th largest in the union – between Massachusetts and Virginia. The individuals who make up this constituency have a perspective of America different than those of us who live inside the US. Being an American living abroad offers a unique view of America and its role in the world that many of us who live here do not perceive. It is important that this voice be heard in our election.

Many Americans living abroad will have their ballots counted in very important swing states. Votes from abroad recently made the difference in a senate race in New Hampshire, a governor’s race in North Carolina, and a statewide race in Florida. In the contest between Hillary Clinton and Trump in 2016 the difference of 107,000 votes spread across the three key states of Michigan, Pennsylvania, and Wisconsin tilted the entire election. The margin in Michigan was less than 11,000 votes.

Could the issues facing the US in 2020 be more challenging? More than 200,000 Americans have died as a result Covid-19. As a result of the pandemic, the economy is in crisis. Unusual wildfires and hurricanes are rampant. Racial tensions are at an all-time high. Questions of corruption and conflicts of interest raise suspicions and severely tests our rule of law. For the first time in any of our lifetimes, the legitimacy of our national election is being called into question and confusion may swirl around its results. Americans living outside of the US have a unique vantage point to view these challenges and a unique perspective on their resolution. American law seeks that wisdom as part of our election process.

Americans living in Ireland have a tremendous opportunity to see some of the very best in American relationships. Originally the familial ties, and now the familial and the commercial ties between Ireland and the US, the long historical links, and strong tourism bring our two countries together in many successful and pleasant ventures. In a democracy, elections effect the policies and practices which either foster or damage these relationships. Americans living in this part of the European Union see what friendly, predicable relationships can bring and what the opposite sows. Elections, as we know, have consequences.

If you are an American citizen living in Ireland, I urge you to connect with VoteFromAbroad.org in order to vote. If you know an American citizen over the age of 18, urge that person to vote. The choice this year could not be more stark and the consequences more severe.

As the late John Lewis, a true American hero, once wrote: “Ordinary people with extraordinary vision can redeem the soul of America by getting into what I call good trouble, necessary trouble. Voting and participating in the democratic process are key. The vote is the most powerful non-violent change agent you have in a democratic society. You must use it because it is not guaranteed. You can lose it.”

Kevin F O’Malley was the US Ambassador to Ireland under former president Barack Obama from 2014-2017.

‘Try and keep me out’: Biden officially invited to visit Ireland

America Letter: Biden urges the people to join him in his new vision of America