US presidential debate in quotes: ‘It’s hard to get any words in with this clown’ 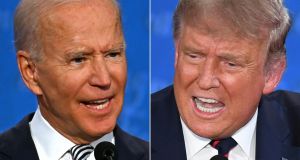 Here are some of the quotes making news at the first US 2020 presidential debate on Tuesday between Republican president Donald Trump and Democratic challenger Joe Biden ahead of the November 3rd election:

On the New York Times story saying he paid only $750 in income taxes in two years, Trump said: “I paid millions of dollars in income tax.”

Moderator Chris Wallace: “Mr President, I’m asking you a question. Will you tell us how much you paid in federal income taxes in 2016 and 2017?”

Wallace: “You paid millions of dollars?”

Biden: “He’s the worst president that America’s ever had. C’mon, man.”

Interrupted repeatedly by Trump, Biden said: “It’s hard to get any words in with this clown.”

Trump, asked about whether Judge Amy Coney Barrett should be nominated to the Supreme Court before the election: “We won the election. Elections have consequences.

“... I think that she (Barrett) will be outstanding. She will be as good as anybody who has ever served on that court. We won the election and therefore we had the right to choose her.”

Trump interjected: “As far as a say is concerned, the American people have already had their say. ... I’m not elected for 3-1/2 years.”

Responded Biden: “He’s elected until the next election. ... The election’s already started.”

Biden, told by Trump that he had adopted former Democratic presidential rival Bernie Sanders’ “socialised medicine” proposals: “Everybody here knows he’s a liar. ... You picked the wrong guy on the wrong night at the wrong time.”

“... Folks, do you have any idea what this clown’s doing? I tell you what, he is not for anybody needing healthcare.”

After Trump explained his health proposal, Biden said: “He has no plan for healthcare. ... The fact is this man has no idea what he’s talking about.”

At another point, while being interrupted by Trump, Biden said: “Will you shut up, man. This is so unpresidential. ... Keep yapping, man.”

Biden to Trump: “You should get out of your bunker and get out of the sand trap and . . . the golf course and go in the Oval Office and (put) together Democrats and Republicans, and fund what needs to be done now to save lives.”

Trump to Biden: “You didn’t think we should’ve closed our country (to China) because you thought it was terrible.”

Trump on Biden’s proposed approach to developing coronavirus vaccines: “People like this would rather make it political than save lives.”

Biden: “Guess what, a lot of people died, and a lot more (are) going to die unless he gets a lot smarter a lot quicker.”

Responded Trump: “There’s nothing smart about you, Joe.”

Biden on Trump’s mask policy: “He’s been totally irresponsible the way in which he has handled the social distancing, and people wearing masks, basically encouraging them not to. He’s a fool on this.”

Retorted Trump: “If you could get the crowds, you would have done the same thing.”

Trump defended his push to reopen the US economy despite the virus, then pointed to Biden and said: “He’ll close down the whole country . . . and destroy our country. Our country is coming back incredibly well. We don’t need somebody to come in and say let’s shut it down.”

Biden: “You can’t fix the economy until you fix the Covid crisis, and he has no intention of doing anything about making it better for you all at home in terms of your health and your safety.

“He ought to get on the job, and take care of the needs of the American people, so we can open safely.”

Biden, challenged by Trump about the state of the U.S. economy when Trump took over: “We handed him a booming economy. He blew it.”–Reuters