US election: Texas reduces postal-vote drop-off locations to one per county 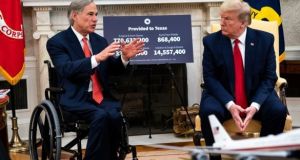 Texas has announced it is reducing the number of postal-vote drop-off locations in the state to just one per county.

The move comes as fresh concerns emerge over voter suppression just weeks before the US presidential election.

Republican governor Gregg Abbott announced the new measures on Thursday, forcing some districts in the state to remove facilities they had already established.

Like many states across the US, election officials in Texas permit voters who cast their ballot by mail to drop their completed ballots at secure drop-boxes, as an alternative to sending their sealed ballot envelope by post.

“These enhanced security protocols will ensure greater transparency and will help stop attempts at illegal voting,” he said.

But local election officials criticised the move. Chris Hollins, the clerk of Harris County which encompasses the greater Houston area in southern Texas said the move was “prejudicial and dangerous.”

As the second largest state in the country, Texas is a must-win state for presidential candidates. Though it has long been Republican territory, Democrats are hoping to make inroads in the state on November 3rd, both in the presidential contest and down-ballot congressional races. The chairman of the Texas Democratic Party Gilberto Hinojosa lambasted the move to limit drop-off ballots.

“Republicans are on the verge of losing, so Governor Abbott is trying to adjust the rules last minute,” he said in a statement.

The new controversy over mail-in ballots comes as Donald Trump, who on Friday morning tested positive for coronavirus, urged his supporters to monitor voting practices in polling sites across the country, a suggestion that his critics say could be intimidatory. During Tuesday’s presidential debate Mr Trump encouraged his supporters to “go into the polls and watch very carefully,” stating that the election would be rigged.

“This is not going to end well,” he said of November’s election. “If I see tens of thousands of ballots being manipulated, I can’t go along with that . . . It means you have a fraudulent election.”

Mr Trump’s exhortation to his supporters, and unsubstantiated claims of electoral fraud, come as Trump supporters were ejected from a polling centre in Philadelphia this week. Last month, a group of Trump supporters disrupted early voting at Fairfax, Virginia.

Election fraud and the reliability of postal voting, have become contentious issues in this year’s presidential campaign amid expectations that a high number of people will choose to vote by mail due to health and safety concerns over the coronavirus. Mr Trump has, repeatedly, without evidence, claimed that absentee ballots lead to a “rigged” election, refusing to commit to a peaceful transfer of power if he loses the presidential election. Several states have used postal voting for years without any evidence of substantive voting fraud.

Texas already has restrictions on absentee voting. Unlike some states where absentee ballots are sent to registered voters automatically, only those over 65 are eligible for a mail-in ballot.

Meanwhile, the president indicated that he will reject any changes proposed by the Commission on Presidential Debates (CPD) to the rules governing the next two presidential debates.

“Why would I allow the Debate Commission to change the rules for the second and third Debates when I easily won last time?,” he tweeted, referring to Tuesday night’s debate against Democrat Joe Biden in Cleveland, Ohio.

The commission is considering making changes to the debates on October 15th and October 22nd, including imposing new limits on speaking times and possibly allowing the moderator to mute a candidate’s microphone.

In a call with reporters, Mr Trump’s campaign manager Bill Stepien, said the commission was biased, claiming many of its co-chairs and board members had previously donated to Democratic campaigns.

“We think President Trump did absolutely fantastic, and we’re looking forward to participating in the second and third debate,” he said.

“We have not asked for any changes, the Biden camp has.”