When is it, where is it and what can we expect from the first Trump-Biden clash? 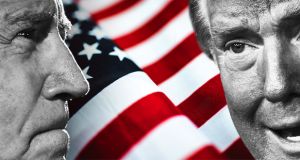 The US will get confirmation that election season is under way on Tuesday night, when Donald Trump and his Democratic challenger, Joe Biden, face each other in the first presidential debate.

The debate, held in Ohio, is the first of three head-to-heads ahead of the vote on November 3rd. Onlookers will be subjected to an hour and a half of argument between the Democratic nominee and the Republican president.

Here’s what you need to know:

When is the debate?

It will begin at 9pm US eastern time, which is 2am Irish time. It will last 90 minutes.

Where is it taking place?

At the Case Western Reserve University and Cleveland Clinic, in Cleveland, Ohio. Ohio has been a swing state over the past two decades, but Trump won there by eight points in 2016. The state is seen as trending towards becoming more solidly Republican, due to its whiter, older population compared with the rest of the US.

Fox News host Chris Wallace will be the man in charge. The Fox News channel has been fawning in its coverage of Trump for the past four years, but Wallace is seen as a relatively independent, straight journalist.

Wallace won praise for an interview with Trump in July, when he challenged the president over the coronavirus death count and memorably dug into Trump’s claim to have aced a cognitive test. He’s no favourite of Trump – who on Thursday baselessly claimed Wallace is “controlled by the radical left”.

The debate will have six 15-minute segments. It will run for 90 minutes, with no breaks for commercials. There will be no opening statements, and the first question will go to Trump.

Wallace said he’s hoping to let the debate flow. He isn’t expected to fact check either candidate – it would be a mammoth, time-consuming task – and has said he will strive to be as “invisible as possible”.

What about coronavirus precautions?

The podiums will be further apart than usual, and Biden and Trump won’t shake hands before or after. According to CNN 60 to 70 people are expected to be in the audience, way below the usual number at a presidential debate.

What’s up for debate?

Wallace was in charge of selecting the six topics, and they were announced by the Commission on Presidential Debates last week. They are:

How are the candidates preparing?

Trump has used flashcards and videos to prepare and has eschewed traditional rehearsals, CBS News reported.

On Sunday, Trump said Rudy Giuliani and the former New Jersey governor Chris Christie had been helping him prepare. According to CBS, Trump aides have studied Biden’s debate habits and created an “arsenal” of material for Trump to use.

How can I watch?

All major US networks are airing the debate, and most news channels, so Americans are spoilt for choice. ABC, CBS, CNN, C-Span, Fox News, MSNBC and NBC are among those who will carry it live. Most of those networks will also offer live coverage online.

Outside the US, viewers can watch the debate on C-Span, a non-profit bipartisan cable channel which televises government proceedings. The channel will run coverage on its website and YouTube channel. Sky News will also show the debate in full.

You can read the debate tee-up by Washington Correspondent Suzanne Lynch here. There will be news and analysis on irishtimes.com shortly after the debate ends and throughout the morning on Wednesday. Our US election subsite is here.

When are the other debates taking place?

The next key date in the debate calender is Wednesday, October 7th, when the vice-presidential debate takes place between Mike Pence and Kamala Harris in Utah. It will be moderated by USA Today journalist Susan Page.

The second presidential debate will take place in Miami, in the key swing state of Florida, on Thursday, October 15th. This will be a “town hall” format, with local voters posing the questions. It will be moderated by C-SPAN journalist Steve Scully.

The third and final presidential debat is set for Nashville on Tuesday, October 27th. NBC News White House correspondent Kristen Welker will moderate and the format will be the same as the first debate, with questions chosen by the moderator. – Guardian/Agencies