Trump tells Latinos Biden would be ‘Venezuela on steroids’ 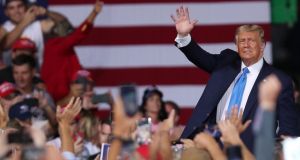 US president Donald Trump: His refusal to commit to a peaceful transfer of power if he loses the election has sparked fears of a constitutional crisis. Photograph: Joe Raedle

US president Donald Trump urged Latino voters in Florida on Friday to endorse him in November’s election, warning that a vote for Joe Biden could herald a Venezuela-like socialist regime in the United States.

Hosting a roundtable event at his hotel in Doral, Miami, Mr Trump told the assembled group of about 200 supporters that Mr Biden had “sold out the Hispanic-American community”.

“I’ve achieved more for Hispanic Americans in 47 months than Joe Biden has achieved in 47 years,” he said. He warned of a socialist regime if Mr Biden was elected.

He also said that immigrants who come to the United States must come legally, a remark that was welcomed by those attending the event.

Mr Trump’s outreach to Hispanic voters comes as polls show that Mr Biden is struggling to appeal to the Latin-American community in southern Florida, many of whom were born or fled socialist countries like Cuba and Venezuela.

With 29 electoral college votes, Florida is a pivotal state for the presidential candidates in November, with polls showing Mr Biden and Mr Trump neck and neck.

Mr Biden made his first visit to the state since winning his party’s nomination on September 15th, while his running mate Kamala Harris also campaigned in Miami earlier this month, meeting with members of the Venezuelan community.

Mr Trump’s event at his Miami resort was part of a whistle-stop campaign trip across the east coast on Thursday and Friday, beginning with a rally in Jacksonville, and finishing with a rally in Virginia on Friday night, while also encompassing a visit to Atlanta and a fundraiser in Washington DC.

In a statement on Mr Trump’s trip to Miami, the Biden campaign focused on the president’s record on healthcare, and Republican governor Ron DeSantis’s refusal to expand Medicaid – healthcare for lower-income people – in the state of Florida.

Mr Biden and his wife Jill travelled to Washington on Friday where they attended the ceremony for the late supreme court justice Ruth Bader Ginsburg in the US Capitol.

Ms Ginsburg became the first woman to lie in state in the Capitol building. Among those who paid their respects on Friday were defence secretary Mark Esper and dozens of members of Congress. Mr Trump and his wife Melania paid their respects to Ms Ginsburg at the supreme court on Thursday, where they were greeted with boos and shouts of “vote him out” by members of the public.

Mr Trump is due to announce his pick for Ginsburg’s replacement on Saturday evening at the White House. Indiana judge Amy Coney Barrett is seen as the frontrunner for the position. If confirmed, the nominee will become the third supreme court justice to have been appointed by Mr Trump.

The president’s refusal this week to commit to a peaceful transfer of power if he loses November’s election has sparked fears of a constitutional crisis in the United States. Mr Trump has repeatedly questioned the reliability of postal ballots, which are expected to be used by a high number of Americans this year due to health and safety concerns over coronavirus.

A number of Republicans have sought to distance themselves from Mr Trump’s comments, asserting that the presidential inauguration will take place on January 20th as set out in the constitution.

Polls show that Mr Trump is trailing Mr Biden in the polls, though the former vice-president’s lead has tightened in recent weeks.