Trump tells Fox News he is ‘immune’ to Covid-19, 10 days after diagnosis 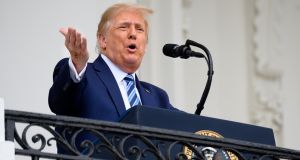 US president Donald Trump speaks from the Truman Balcony of the White House in Washingto on Saturday. Photographer: Erin Scott/Bloomberg

US president Donald Trump said in a Fox News interview on Sunday he no longer has Covid-19 and is not a transmission risk for the virus, as he prepares to hit the campaign trail on Monday with a return to big rallies.

Mr Trump said tests showed he would be able to return to campaigning with no risk to others.

His doctor said on Saturday the president was not a transmission risk but did not address whether he tested negative for the virus.

“I passed the highest test, the highest standards, and I’m in great shape,” Mr Trump said on Fox News Channel. “It seems like I’m immune. I can go way out of the basement.”

Navy Commander Dr Sean Conley said Mr Trump meets the Centres for Disease Control and Prevention (CDC) criteria for safely discontinuing isolation and that by “currently recognised standards” he is no longer considered a transmission risk.

The memo followed Mr Trump’s first public appearance since returning to the White House after being treated for the coronavirus, but it did not spell out when or if he had tested negative for the virus.

Some medical experts had been sceptical that Mr Trump could be declared free of the risk of transmitting the virus so early in the course of his illness.

Just 10 days since an initial diagnosis of infection, there was no way to know for certain that someone was no longer contagious, they said.

Dr Albert Ko, an infectious disease specialist and department chairman at the Yale School of Public Health, said the White House appeared to be following CDC guidelines for when it is appropriate to end isolation after mild to moderate cases of Covid-19.

But Dr Ko cautioned that those who have had severe cases of the diseases should isolate for 20 days, noting Mr Trump was treated with the steroid dexamethasone, which is normally reserved for patients with severe Covid.

He added the White House had issued “convoluted” statements about Mr Trump’s health that left many questions unanswered, including whether the president ever had pneumonia.

Meanwhile, Saskia Popescu, an infectious disease epidemiologist at George Mason University, said the tight time frame laid out by the White House made it appear “they’re really just pushing to get him out of isolation” and back to campaigning.

Hundreds of people gathered on Saturday afternoon on the South Lawn for an address on his support for law enforcement from a White House balcony.

Mr Trump took off a mask moments after he emerged on the balcony to address the crowd on the lawn below, his first step back onto the public stage with just more than three weeks to go until election day.

He flouted, once more, the safety recommendations of his own government just days after acknowledging that he was on the brink of “bad things” from the virus and claiming that his bout with the illness brought him a better understanding of it.

“I’m feeling great,” said Mr Trump, who said he was thankful for their good wishes and prayers as he recovered.

He then declared that the pandemic, which has killed more than 210,000 Americans, was “disappearing” even though he is still recovering from the virus. – AP, Reuters