US president Donald Trump has nominated conservative judge Amy Coney Barrett as his third Supreme Court appointment, setting off a scramble in the Republican-led Senate to confirm her before the US election. Video: The White House 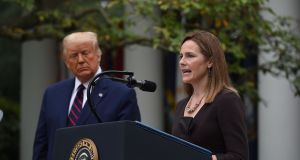 Judge Amy Coney Barrett speaks after being nominated to the US Supreme Court by US president Donald Trump. Photograph: Olivier Douliery/AFP via Getty

Amy Coney Barrett has been nominated by US president Donald Trump to replace Ruth Bader Ginsburg on the supreme court, paving the way for what promises to be a contentious confirmation hearing in the Senate just weeks before the US presidential election.

The 48-year-old, who was previously appointed to the US Court of Appeals for the Seventh Circuit in Chicago by Mr Trump in 2017, will become the fifth woman appointed to the court in history if she is approved as expected by the Republican-led senate.

Announcing his choice at a ceremony in the White House Rose Garden, Mr Trump described Ms Coney Barrett as “one of our nation’s most brilliant and gifted legal minds … a woman of unparalleled achievement, towering intellect, sterling credentials and unyielding loyalty to the constitution.”

“I stand before you today to fulfil one of my highest and important duties under the United States constitution – the nomination of the supreme court justice,” he said at a ceremony in the White House.

Noting that he had now appointed three supreme court justices, he said it was “a very proud moment indeed.”

“Amy Coney Barrett will decide cases based on the text of the constitution as written,” he said.

“Her qualifications are unsurpassed, and her record is beyond reproach. This should be a straightforward and prompt confirmation.”

He appealed to Democratic senators “to provide her with the respectful and dignified hearing she deserves, and frankly the country deserves,” he said, noting that the media should refrain from personal attacks.

Ms Barrett said she was “deeply honoured” by the confidence Mr Trump has put in her.

“I fully understand that this is a momentous decision for a president.”

Ms Barrett said she will be “mindful of who came before me,” if confirmed, paying tribute to Ms Ginsburg, who she said had not only broken glass ceilings but “smashed” them.

“Judges are not policy makers and must be resolute on putting aside any policy views they hold,” she said.

The new supreme court nominee, a native of Louisiana is a mother of seven, including two children she adopted from Haiti. She clerked for the late supreme court justice Antonin Scalia, before joining the law faculty at the University of Notre Dame.

A devout Catholic, she has been a favourite of anti-abortion conservatives who hope that a conservative majority on the bench will eventually result in a challenge to the 1973 Roe V Wade ruling that introduced the right to abortion.

Her links, to People of Praise, a charismatic Christian organisation in South Bend, Indiana, has come under scrutiny.

Ms Barrett was pressed on her religious views, and whether they would influence her job as a judge, during her confirmation hearing for the appeals court vacancy in 2017. She told senators that her faith would not affect her decisions as an appellate judge.

Mr Trump considered Ms Coney Barrett to replace Justice Anthony Kennedy who retired in 2018, but instead opted for Brett Kavanaugh.

If confirmed, Ms Barrett’s appointment to the bench will shift the ideological bent of the court to the right, given that she will be replacing the leading liberal jurist Ruth Bader Ginsburg.

Senate Republicans have indicated they will press ahead with a confirmation hearing so close to an election, despite blocking former president Barack Obama’s nominee to replace Mr Scalia in 2016 because it was an election year.

With a 53-47 majority in the chamber, senate majority leader Mitch McConnell appears to have enough votes necessary to confirm the nominee, and may hold the hearing and vote before the November 3rd election. It falls to Senator Lindsey Graham, as chair of the Senate Judiciary Committee, to schedule the hearings.

Mr Kavanaugh’s hearing was one of the most contentious in modern times, after his nomination was overshadowed by claims of sexual harassment by Christine Blasey Ford, a woman who said that Mr Kavanaugh assaulted her at a party as a teenager.