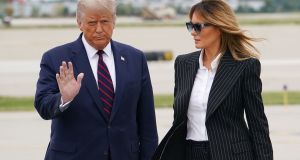 US president Donald Trump and first lady Melania Trump arriving at Cleveland Hopkins International Airport on September 29th: the couple are currently quarantining at the White House having both tested positive for Covid-19. Photograph: Mandel Ngan/AFP

US president Donald Trump has cancelled all his election campaign events in the coming days, after he tested positive for coronavirus.

Mr Trump, who has repeatedly played down the threat of the virus, confirmed the diagnosis in an early morning tweet on Friday. The news sparked a scramble of testing and contact-tracing within the West Wing and on Capitol Hill, where at least one senator announced a positive test for the virus.

News of the president’s diagnosis sent markets instantly lower across the world amid fresh uncertainty about the political situation in Washington, just a month before the US election.

Mr Trump and his wife Melania, who also tested positive, began quarantining at the White House for an unspecified amount of time, but the president may well be forced to withdraw from the campaign trail for at least 10 days. White House chief of staff Mark Meadows said the president was “in good spirits” and was continuing to work from his residence.

The development also cast doubt on the future of the final two presidential debates. Mr Trump is due to face off with his Democratic opponent Mr Biden on October 15th in Miami, and a week later in Nashville.

There were suggestions from the White House on Friday that some form of virtual event could take place instead, though this would have to be agreed by Mr Biden and the Commission on Presidential Debates. Mr Trump has already clashed with the independent commission, stating that he opposes its plans to change the structure of the next two debates after this week’s unruly and chaotic clash between the two men.

Both presidential candidates are in their 70s and in a high-risk category for the virus.

Mr Biden pressed ahead on Friday afternoon with a campaign event in Michigan, a key battleground state in November’s election, after testing negative for the virus earlier in the day.

The former vice-president, who has limited his public engagements and frequently wears a mask, sent his best wishes to his election rival in a tweet.

“Jill and I send our thoughts to President Trump and First Lady Melania Trump for a swift recovery. We will continue to pray for the health and safety of the president and his family,” he said.

Speaking on Capitol Hill on Friday, Ms Pelosi said she was praying for a speedy recovery for Mr Trump, but said that his past behaviour, including going into crowds and not wearing a mask was a “brazen invitation for something like this to happen”. She said she hoped his diagnosis would “lead to a saner approach” in dealing with the virus.

Mr Pelosi also indicated that a bipartisan deal on a new coronavirus relief package was imminent, calling on airlines to delay plans to lay off staff as federal stimulus measures come to an end.