Analysis: Move shows lack of empathy for relatives of those who died from coronavirus 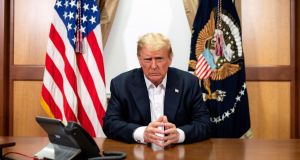 Even by the extraordinary standards of the past week’s news agenda, Donald Trump’s decision to leave the Walter Reed hospital and wave to his supporters outside on Sunday was another mind-spinning move by the US president.

Hours after his physician confirmed that he had taken supplemental oxygen and had been administered a steroid course that is typically given to the most seriously ill Covid-19 patients, Trump left the hospital grounds in a convoy of SUVs. Throughout the weekend, the president had made reference to the supporters outside, retweeting supportive videos and reportedly sending chocolates out to the crowd on Friday night. By Sunday evening it seemed that the thirst for adulation proved too much.

Trump defied even the most basic guidance given to any sick patient, particularly an overweight 74-year-old male, and left the hospital grounds to receive a brief flurry of approval from his supporters.

Quite apart from the risk in which he put the health of the secret service agents that accompanied him, the decision showed his immense lack of judgment as a president.

The move was reminiscent of the moment in June when he decided, apparently on impulse, to stride out of the White House and pose outside St John’s Church holding a bible – a move that backfired, and utterly misread the mood of a nation reeling from the police killing of African-American man George Floyd, and facing a national reckoning with racial injustice.

Trump’s short parade on Sunday night was a similar misjudgment, showing an utter lack of empathy with the thousands of Americans whose relatives have died from coronavirus, and who lacked the luxury of the specialised care and treatment available to the president of the United States.

#Trump has left Walter Reed hospital for a drive-by to wave at his supporters outside... pic.twitter.com/rwRIRXDWuA

In a country where healthcare inequality is egregious, and the majority of those who have been impacted by the virus are lower-income Americans and people of colour, his insensitivity is even more pronounced.

Trump’s insensitivity to others and the real experience of most of the American public is rooted in his narcissism – like the bible photo-op, his motivation was his own desire to be at the centre of things. Always the showman, his focus was on the visual image. Evidently frustrated by the bungling of the messaging around his health over the weekend, he decided to become his own messenger, without any thought for how this would play publicly.

We also saw a president playing to his fans, not trying to be a president for all Americans as he rushed to wave to his flag-waving supporters.

The pre-recorded video tweeted by Trump as he left the hospital, was further evidence of his apparent lack of understanding about coronavirus.

After extolling the virtues of his fans outside – “they’ve got Trump flags, and they love our country,” he expounded for 30 seconds on what he had learned about coronavirus.

Describing what had been “a very interesting journey,” he said he had “learned a lot” about the pandemic.

“I learned it by really going to school. This is the real school, this isn’t the ‘read the book’ school, and I get it, and I understand it and it’s a very interesting thing. And I’m going to be letting you know about it. In the meantime we love the USA.”

Like the dinner-party know-all who delights in explaining a topic to an audience who already knows the facts, Trump spoke about Covid-19 as a “very interesting thing,” that he now “understands.”

This will be cold comfort to the families of more than 200,000 Americans who lost their lives to Covid-19, many as a result of the Trump administration’s failed response to tackling the virus.