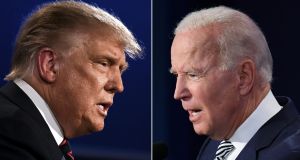 Donald Trump brought all the subtlety of America’s splenetic talk radio to Tuesday’s first TV presidential debate, making it less a debate than a bar-room brawl. “This is so unpresidential,” Joe Biden lamented with some understatement. The Cleveland event descended fast into derisive name-calling and hectoring, an extraordinary spectacle even by the standards of Trump’s presidency.

Bulldozing the debates’ traditions of decorum and restraint and, at least feigned, mutual respect, and shredding the official rules, it was classic Trump: bullying, boastful, volume up high, constantly interrupting, spraying invective, his incoherent narrative woven through with lies, contempt for his own advisers and science, conspiracy theories, as well as apologias for racism and the far-right. “President Trump did a phenomenal job,” he boasted. “We did.”

Voters hoping to get a sense of what the president will do in his second term will have been disappointed. The unstated answer was simple, and crude: “more of the same”. Not reassuring, Biden pointed out, given his pandemic record.

The debate was largely policy-free. Attempts to get Trump to spell out his prescription for the health system when he has finished demolishing Obamacare produced only vitriolic attacks on Biden’s “socialist” medicine. The latter warned of the threat some 100 million women and people with pre-existing conditions face if Obamacare is dismantled, a real prospect if Trump’s supreme court nominee, Amy Coney Barrett, is confirmed.

Biden, who published his own tax returns ahead of the debate, struck home effectively with the claim Trump had managed to game the tax code so that “he pays less tax than a schoolteacher makes”. Perhaps most remarkable was the complete absence of any Trump attempt to woo beyond his base the 14 per cent middle ground of voters who say they are still undecided. He is still publicly denying the possibility of defeat – only possible through fraud, he insists – and trends could shift in five weeks. But that base is simply too small to rely on it alone.