White House has presided over the ‘greatest failure in history’, says Harris 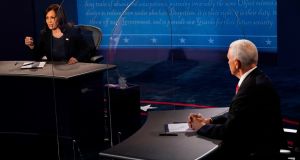 Kamala Harris accused the Trump-Pence White House of presiding over the “greatest failure of any presidential administration in the history of our country” in its handling of the coronavirus pandemic during the first and only vice-presidential debate of the 2020 election.

Vice-president Mike Pence forcefully defended Donald Trump’s handling of the crisis that has killed more than 210,000 Americans, as Wednesday night’s debate in Salt Lake City unfolded in the shadow of the president’s hospitalisation for Covid-19, which has thrown the government into upheaval and upended the presidential race four weeks before election day.

Over the course of 90 minutes, Ms Harris, the California senator and running mate of Democratic nominee Joe Biden, assailed Mr Trump over his stewardship of the American government, denouncing his administration’s response to the various crises affecting the US, from the racial injustice protests to the wildfires devastating the west coast, as well as his taxes and personal conduct in office.

But she said no failure was as great as the president’s mismanagement of the coronavirus pandemic and the ensuing economic fallout.

Ms Harris charged that the president misled the country about the severity of the virus when it first began to spread earlier this year: “They knew, and they covered it up.”

“Frankly, this administration has forfeited their right to re-election based on this,” Ms Harris concluded in her opening comments to Mr Pence, who leads the White House’s coronavirus task force.

Mr Pence acknowledged that the nation has gone through a “very challenging time this year” as a result of the outbreak, which has infected millions of Americans, including the president and many top White House officials.

“I want the American people to know, from the very first day, President Trump has put the health of America first,” he said. He insisted, in defiance of the facts, that the president had a clear national strategy for addressing the pandemic.

“Clearly it hasn’t worked, when you’re looking at over 210,000 dead bodies in our country,” Ms Harris retorted.

Distanced 12 feet apart and separated by plexiglass barriers, the coronavirus framed much of the debate even before the candidates stepped on to the stage. The Pence campaign initially objected to a request for a physical barrier, but ultimately agreed. In the auditorium at the University of Utah, any guest who refused to wear a mask was to be removed.

Against this backdrop, the forum served not only as a preview of two leading presidential contenders in 2024, but as a grim reminder that the role of vice-president is to succeed the president should he become incapacitated or die while in office.

Mr Trump (74) has said he is “feeling GREAT” though questions remain about his the severity of his infection. At 77, Biden would be the oldest US president ever to serve in office.

Neither Pence nor Harris directly answered a question about whether they had discussions about taking over the presidency.

Polls show that a majority of Americans have lost faith in Mr Trump’s handling of the virus and blame his administration for failing to control it. Mr Trump, who claimed he had “learned a lot” about the virus from his own experience with it, has since downplayed its severity, likening it to the flu and urging Americans not to be afraid of it.

Given the uncertainty hanging over future presidential debates due to the president’s infection, Mr Pence and Ms Harris were under additional pressure to articulate their campaign messages.

Mr Pence attempted to cast the Biden-Harris ticket as extreme, while Ms Harris accused the administration of attempting to strip Americans of their healthcare and stoking racial division.

After the first presidential debate in Ohio devolved into a chaotic shouting match last week, moderator Susan Page of USA Today pleaded for a “civil” discussion. Though there were sharp exchanges over issues of racism, climate and health care, there were far fewer personal insults and a much more robust discussion of the issues.

Ms Harris, who is the first black woman to participate in a vice-presidential debate, was cheered by supporters online when she responded to Pence’s repeated interruptions. “Mr Vice-president, I’m speaking,” she said, flashing a wide smile.

In a show of civility absent from the first debate, Ms Pence commended Harris, the daughter of immigrants from Jamaica and India, on the “historic nature of your candidacy.

Asked whether justice had been done in the case of Breonna Taylor, the 26-year-old medical technician who was killed in her Louisville home during a police raid and whose death has sparked nationwide protests, Ms Harris said she did not believe it had after a grand jury declined to bring charges against the officers involved.

Mr Pence disagreed. Extending his sympathies to her family, he said: “I trust our justice system, a grand jury that reviews the evidence.”

In an exchange on the climate crisis, Ms Harris said that unlike Mr Trump, Mr Biden “believes in science” and defended Mr Biden’s economic plan which would create new jobs in the renewable energy industry.

“We have seen a pattern with this administration which is they don’t believe in science, and Joe’s plan is about saying we’re going to deal with it, but we’re also going to create jobs,” she said.

Conceding that the climate was changing, Mr Pence pushed back and said he was proud of the administration’s environmental record. He said Biden’s climate plan was the the Green New Deal by another name, and accused the former vice president of wanting to ban fracking, a particularly sensitive issue in the battleground state of Pennsylvania.

Ms Harris repeated that Biden does not, in fact, intend to ban fracking but Pence refused to concede the point.

In a segment focused on the supreme court nomination of conservative Amy Coney Barrett following the death of celebrated liberal justice Ruth Bader Ginsburg, Mr Pence pressed Ms Harris on whether a Biden administration would expand the court as some liberals have suggested.

Ms Harris, like Mr Biden, did not answer the question directly, but argued Republicans had effectively packed the court by refusing to hold a hearing for Barack Obama’s supreme court nominee in 2016 because it was a presidential election year, but are now pushing through the president’s pick weeks before election day.