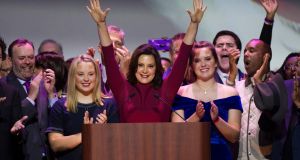 Democratic governor of Michigan Gretchen Whitmer: “This White House has a duty to call it out and they won’t do it – in fact, they encourage it.” Photograph: Rena Laverty/EPA

The Michigan governor who was the target of a foiled right-wing kidnapping plot said on Friday that Donald Trump’s rhetoric “incites more domestic terror”, after the president posted a series of aggressive tweets overnight that sought to shame the victim of the plot.

Thirteen men have been charged over a plan to kidnap Gretchen Whitmer, the Democratic governor of Michigan, whom Joe Biden considered naming as his running mate for the November election before picking Kamala Harris.

The men, some of whom were members of a right-wing, self-styled militia group, discussed blowing up a bridge and bundling Ms Whitmer into a boat. Another plan involved killing Ms Whitmer on her doorstep, according to the authorities.

The fallout from the thwarted kidnapping – which was set to take place before the November 3rd election – has further pulled back the curtain on the ideological polarisation in US society, and descended into a growing political row.

On Friday Mr Biden accused Mr Trump of “giving oxygen to the bigotry and hate we see on the march in our country”, as Mr Trump attacked Ms Whitmer hours after the plotters were named.

Mr Trump, who has spent months criticising Ms Whitmer and other Democratic governors over measures to try to control the coronavirus pandemic as it surged across America, on Thursday said Ms Whitmer had “done a terrible job” in Michigan, and complained that she was yet to thank him for the FBI stopping the plot.

“Each time he has tweeted about me, each time that he has said ‘liberate Michigan’ and said I should negotiate with the very people who are arrested because they’re ‘good people’, that incites more domestic terror,” Ms Whitmer told ABC News.

“And I am not the only governor going through this. Certainly it’s been worse for me than most, but it is not unique to me, it is not even unique to Democrats. This White House has a duty to call it out and they won’t do it – in fact, they encourage it.”

Meanwhile, it was disclosed that Ms Whitmer and her family were at times moved around by authorities as law enforcement tracked the men who allegedly plotted for months to kidnap her, the state’s attorney general said on Friday.

Dana Nessel disclosed the detail to CBS This Morning. She said the Democratic governor was consistently updated about the investigation over the past couple months.

“She was aware of things that were happening,” Ms Nessel said. “At times, she and her family had been moved around as a result of activities that law enforcement was aware of.”

Ms Whitmer became a hate figure for right-wingers throughout the spring, when she was among a number of state governors to issue stay-at-home orders in an attempt to stop the spread of Covid-19.

In April, thousands of protesters, many armed, besieged the Michigan state capitol, in Lansing, to demonstrate against Ms Whitmer’s order.

The FBI said on Thursday that the plan to kidnap Ms Whitmer began around the time of those demonstrations, and was months in the making.

“Snatch and grab, man,” Adam Fox, one of the conspirators, unwittingly told an FBI informant in July.

“Grab the fuckin’ governor. Just grab the bitch. Because at that point, we do that, dude – it’s over.”

Plotters twice surveilled Ms Whitmer’s holiday home, including in mid-September, as they developed plans to take her hostage.

The men attempted to construct explosive devices and held combat drills, and planned to blow up a bridge to Ms Whitmer’s home to slow down police.

Seven of those arrested are backers of the so-called boogaloo movement, NBC News reported. Experts say boogaloo is a far-right, violent anti-government movement, and some adherents are also tied to neo-Nazi groups.

Of the president’s response to the revelations, Ms Whitmer said on Friday: “A decent human being would pick up the phone and say, ‘Are you okay? How’s your family doing?’

“That’s what Joe Biden did. And I think it tells you everything you need to know about the character of the two people that are vying to lead our country for the next four years.”

Mr Biden, who is leading Mr Trump in opinion polls in several key swing states – including Michigan – criticised the president in the early hours of Friday morning.

“When Governor Whitmer worked to protect her state from a deadly pandemic, President Trump issued a call to “LIBERATE MICHIGAN!” Mr Biden said in a tweet.

“That call was heard. He’s giving oxygen to the bigotry and hate we see on the march in our country – and we have to stop it.”

Pro-Whitmer demonstrators held a gathering of support for the governor outside the state capitol building in Lansing on Thursday evening. – Guardian