Accountability is the cornerstone of any functioning democracy

US president Donald Trump and his Democratic rival Joe Biden clashed in a fiery and often chaotic first face-to-face debate ahead of the US election. Video: Reuters 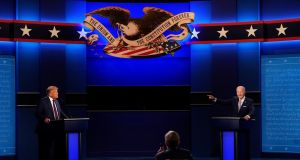 President Donald Trump and Democratic presidential candidate Joe Biden during the first presidential debate with moderator Chris Wallace of Fox News. The bar was not so much set low, as simply lying on the floor. And yet proceedings still managed to fall short of expectations as viewers were treated to a mudslinging match between two highly unsuitable candidates. Photograph: Patrick Semansky/AP

No one was expecting great things from a tete-a-tete between US president Donald Trump and Democratic nominee Joe Biden. Between Trump’s penchant for interrupting with incoherent rants and Biden’s uncanny ability to get lost in even the most basic policy detail, the presidential debate on Tuesday night was never going to be edifying.

The bar was not so much set low, as simply lying on the floor. And yet proceedings still managed to fall short of expectations as viewers were treated to a mudslinging match between two highly unsuitable candidates.

The stakes, of course, have rarely been higher – as Trump has revealed over his tenure not just a staggering moral lassitude but also an administrative incompetence that has rattled even some of his most fervent supporters. But the question, of course, is does it matter who “won” or “lost” on Tuesday night?

Presidential debates – for all their hype and glamour – rarely have tangible effect on electoral outcomes, as political scientists have gone to great lengths to understand since the popularisation of the televised debate in the 1960s. In recent history, two performances are repeatedly cited as altering the candidates’ electoral fortunes: Richard Nixon sweated too much against John F Kennedy in 1960 and Al Gore kept sighing in response to George W Bush in 2000. Consensus is that these incidents probably did have an impact on the electoral map – but academic observers are broadly united in understanding that these are the exceptions that prove the rule.

In fact, vast swathes of voters approach these debates with their minds already firmly made up. And their chosen candidate’s relative performance more often than not strengthens these partisan loyalties rather than making viewers question them.

This is particularly salient in the case of Trump and Biden, as the percentage of undecided voters is even smaller than is usually to be expected (just 14 per cent according to latest polling). That, of course, is no insignificant sum, but it would take a strikingly comprehensive victory of one candidate to sweep up a meaningful proportion. And as we well know, neither Biden nor Trump were capable of landing even one significant blow, let alone enough to win over every undecided heart and mind.

And of greater consequence, perhaps, is not the debate itself but the punditry and spinning in the immediate aftermath. As the media war drags on for days – with similarly partisan outlets tussling over the alleged winners and losers – this narrative setting can matter much more than what each candidate managed to convey on camera.

When Barack Obama had an uncharacteristically lacklustre performance against Republican challenger Mitt Romney in 2012, the prevailing view from focus groups was that he underwhelmed. Nothing major – just lacking the spark we came to expect of the Democratic ingénue of 2008. Within days – after encountering the deluge of media spin – polling showed that plenty of voters instead believed the debate was a catastrophic – perhaps career-ending – drama. We would be naive to assume this is because the American people en masse decided to revisit the debate, parsing it for critical details missed first time round. Instead voters were influenced as a media narrative formed around them.

We might ask, then, what’s the point of this sorry charade? Most voters have made their mind up; debates can entrench polarisation and encourage partisanship; the entire system reinforces the apotheosis of the politician-cum-celebrity phenomenon. And if Tuesday night is anything to go by the debates are more headache-inducing than valuable television. What the media says about the candidates perhaps has greater power to influence, too.

Despite questions over the limitation of debates to inform the political process and redirect its outcomes, the case to be made for them is still a strong one. That they rarely make a tangible difference does not rid them of their democratic function altogether.

As a start, a debate watched by an estimate of 80 million Americans is never going to be low-stakes. Away from a manicured campaign trail it is a valuable opportunity for the candidates to reveal critical facets of their character (though you may be hard-pressed to find someone without a working grasp of Trump’s). And studies repeatedly confirm that presidential debates can increase voter knowledge of the candidates’ policy platforms (though voters knowing more does not necessarily mean they are liable to be more persuadable in any given direction).

But away from these caveats is something more foundational. Accountability is a cornerstone in any functioning democracy – and that candidates can be taken to task directly for their failings, inconsistencies and character should not be cast aside as irrelevant so easily.

We see this every week with the UK prime minister and opposition leader at prime minister’s questions and in the (altogether more civilised and humane) leaders’ debates in Ireland during election season.

We should, of course, be wary overestimating the consequences of political debates. But we too should resist the inclination to assess the democratic value of something simply via its capacity to influence election results. Trump versus Biden may have left a lot to be desired, but it’s a privilege to have that presented clear as day to us in the first place.