Donald Trump refused to denounce a conspiracy theory peddled by far-right group QAnon when grilled on the subject by NBC host Savannah Guthrie during a televised town hall on Thursday night. Video: NBC 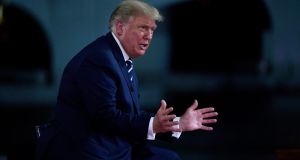 Donald Trump refused to denounce a conspiracy theory peddled by far-right group QAnon as the US president and his Democratic challenger Joe Biden participated in separate televised town halls on Thursday night with less than three weeks until the election.

Mr Trump and Mr Biden took questions from voters on two different television networks, NBC and ABC, during appearances that were scheduled in the same time slot – an unprecedented set-up that came about after the president pulled out of the second live debate.

Mr Trump initially said he did not know about QAnon - a pro-Trump group of conspiracists that has been labelled a terror threat by the Federal Bureau of Investigation - which believes powerful Democrats are running a secret paedophilia ring.

He said: “What I do hear about [QAnon] is that they are very strongly against paedophilia, and I agree with that.”

However, he went on to defend his recent retweet of a baseless conspiracy theory espoused by QAnon, which holds that former president Barack Obama and Mr Biden staged the killing of Osama bin Laden and subsequently killed the Navy Seal team involved in the operation to cover it up.

“That was a retweet, that was an opinion from somebody. I’ll put it out there. People can decide,” Mr Trump said.

Although American voters were unable to watch both of the town halls due to the TV scheduling conflict, the broadcasts underscored the stark differences between the two candidates.

Mr Trump gave combative answers during terse exchanges with the NBC moderator, Savannah Guthrie, who questioned him on the opaque timeline leading up to his Covid-19 diagnosis and his refusal to release his tax returns. At one point he dismissed Ms Guthrie as “so cute”.

The former vice-president again refused to clarify his position on expanding the size of the supreme court and “packing” it with liberal justices. Many Democratic activists want Mr Biden to support court packing in retaliation to Mr Trump and Republicans’ decision to press ahead with the nomination of Amy Coney Barrett during the election campaign.

Mr Biden also expressed regret for supporting a controversial 1994 crime bill that has been blamed for contributing to the mass incarceration of black Americans. Asked whether it had been a mistake to support the law, he replied “yes it was”, although he did not completely disavow the legislation.

The candidates gave differing assessments of how the US has handled the pandemic, with Mr Trump insisting the country was a “winner” in the fight against Covid-19. He also defended his decision not to promote mask-wearing, erroneously claiming that 85 per cent of people who wear masks contract the disease.

However, Mr Biden accused the president of missing “enormous opportunities” to slow the spread of Covid-19, and ridiculed Mr Trump for claiming the virus would disappear by Easter or the summer.

Mr Trump and Mr Biden also offered competing perspectives on the president’s tax cuts for corporations, with Mr Trump claiming that reversing them would result in “a depression the likes of which you have never had”.

He added: “Companies are pouring into our nation because of the tax rate . . . [Biden] comes along and raises rates, all those companies that are coming in, they will leave the US, so fast your head will spin.”

But Mr Biden repeated his intention to raise the US corporate tax rate from 21 per cent to 28 per cent, arguing that it would bring in $1 trillion of revenue while criticising the fact that many companies have generated significant profits during the pandemic.

Meanwhile, Mr Trump dismissed recent reporting in The New York Times about his tax returns as inaccurate, but did not deny that he owed roughly $400 million to his lenders. “It’s a tiny percentage of my net worth . . . $400m is a peanut,” he said.

The candidates ended up participating in duelling TV broadcasts on Thursday after the president refused to appear at the second debate because the organisers decided it should be held virtually due to his recent Covid-19 diagnosis.

After Mr Trump pulled out, Mr Biden agreed to participate in the ABC town hall. On Wednesday, rival channel NBC announced that it would air a broadcast with Mr Trump at the same time.

NBC, which previously aired Mr Trump’s reality TV show, The Apprentice, had faced external and internal criticism for deciding to hold the town hall with the president in the same time slot as ABC’s broadcast with Mr Biden. – Copyright The Financial Times Limited 2020