US Politics: The American president’s faults are more libertarian than authoritarian 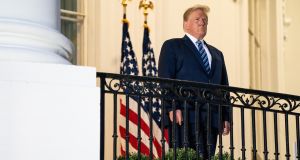 US president Donald Trump stands on the Truman Balcony upon returning to the White House from the Walter Reed Medical Center on Monday. Photograph: Anna Moneymaker/New York Times

Eva Perón addressed the Argentine people from one. Communist Romania’s Nicolae Ceausescu gave his final speech on another. As for Mussolini, he liked to grip the balustrade of his as he orated, lantern jaw jutted to the masses.

The demagogue’s natural habitat is a balcony. When Donald Trump mounted the White House version this week, days after testing positive for coronavirus, the US president invited comparisons with the autocrats of yesteryear.

But then these have been flowing, rather too casually, since before he was elected. True enough, his nationalism, his messianic following and his political rise in the aftermath of a financial crash are all suggestive of the 1930s far-right. It is just that so much else about him bucks the parallel. The past week has brought it out.

If the president’s illness has shown anything, it is that he differs from classic strongmen in a very US way. His populism tends more to the libertarian than the repressive. The mask-spurning, the cavalier gatherings, the call to not let the virus “dominate”: it is personal freedom to which the president has shown a heedless attachment.

A conventional despot would use the pandemic as a pretext to hoard and exploit executive power. Trump has used it to define himself against a meddling state. His line of attack against Joe Biden, the Democrat candidate, is that he would smother America’s economic bounceback with fussy curbs on everyday life.

Trump’s anti-paternalism was on show even before the pandemic. Having promised an infrastructure splurge, his main legislative achievement was a tax cut. More than the construction of a wall against Mexico, his animating goal is the repeal of Obamacare. Far from revering the military and the secret state, like your epaulette-wearing tyrant, he has found himself at odds with both.

And when it comes to fiscal relief for a stricken economy, a wildly popular idea, he is only slightly more generous than Congress’s free-market Republicans. On Tuesday, he called off talks with the Democrats over a stimulus package. This is not a leader who is mesmerised by the grandeur of Hobbes’ Leviathan. Would that he were.

The president’s ornery individualism does not just distinguish him from the autocrats of the past, but from contemporaries with whom he is also unthinkingly conflated.

The trouble with the Nationalist International, that grouping together of any tub-thumping leader from Washington to Manila, is that it covers hopelessly divergent attitudes to the state. Russia’s president Vladimir Putin and Hungary’s prime minister Viktor Orban are recognisable autocrats. They see few limits to the proper remit of official power. They are not much moved by market dogma, or freedom as an end in itself.

For Trump, by contrast, but also for Brazil’s president Jair Bolsonaro, the state is more usually the problem. Theirs is a bluff disregard for rules as effete and unbecoming of rugged nations.

To elide Trump with orthodox dictators is to misunderstand not just one man, but US politics. The most extreme policies here are often couched in libertarian terms. “Don’t tread on me” can be an inspiring slogan, or a disconcerting one. To judge by the second amendment, it is a country that does not even accord the state a monopoly on the legitimate use of violence. The US far-right means something altogether more anarchic than it does in, say, France or post-communist Europe.

Of course, there is still time for Trump to warrant all the analogies with interwar fascists. He may yet contest a fair-and-square defeat in next month’s presidential election. Were he to win, he could take his measures against immigrants (with and without documents) to new levels.

On the available evidence, though, his principal threat to the republic is misgovernment, born of a sceptical, almost nihilistic view of government itself. Too little grip, not too much, is the problem.

It feels wrong to complain about excessive education, but the second World War and the years leading up to it are almost too well taught. That period has become the lens through which we see all contemporary events. Just as any non-martial foreign policy towards a rogue state is “appeasement”, any jingoist leader is a totalitarian. In truth, the Trump phenomenon is much more about antic rebellion than deference to the collective. The point is that it is no less harmful for that.

“Everything within the state, nothing outside the state, nothing against the state,” said Mussolini, in his epistrophic definition of fascism. It is hard to draft a sentence that Trump and his Republican supporters are less likely to utter. – Copyright The Financial Times Limited 2020