Biden must put the needs of Trump voters first

Democrat’s tactics may get him elected, but they will not make him a successful president 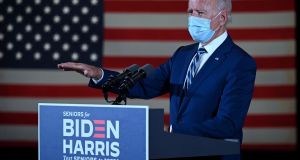 Democratic presidential candidate Joe Biden. He will not be able to be president of all of the US without prioritising the needs of the Trump voters, perhaps at the expense of the states that did vote for him. Photograph: Jim Watson/AFP via Getty Images

A recent New York Times article listing bellwether counties to watch on election night (and beyond) to gauge who is winning the national election includes Collin County, which is north of my home town of Dallas. Full of new builds and professionals, the traditionally conservative suburbs of Collin County are now categorised as a “toss-up”.

If Trump loses Collin County and the state of Texas in November then the Republican Party will be forced to reflect on its future. It would have lost the last reliable large state and electoral college votes (38) it has for presidential elections.

Trump’s madness concerning his illness, and his disregard for those around him, have ironically facilitated the campaign strategies of his opponents – just wait for him to make an error, for his outbursts and the lies he tells to protect himself, for his divisive and derogatory language concerning minorities and women, and for evidence of his corruption, and then criticise his actions and language and stress how differently you would behave.

Sir Keir Starmer has essentially adopted the same strategy with Boris Johnson. As Starmer remarked in prime minister’s questions on October 7th: “The prime minister ignores the warning signs, hurtles toward a car crash, then looks in the rear mirror and says ‘what’s all that about?’ It’s quite literally government in hindsight.”

The theory is that their opponent’s alienation of voters through negligent leadership and outrageous comments, coupled with population trends, can only raise the opposition’s chances of electoral success.

Indeed, in Texas the Democrats have been waiting a while for demography to catch up with the governing Republicans as they assume growing Hispanic and other minority populations will undermine the latter’s decades-long dominance.

Not interrupting an opponent while they are making a mistake may function effectively as a campaign strategy, but it will not bridge social and political divisions or prepare the public for future challenges.

Commentators have called Biden’s recent speech in Gettysburg, Pennsylvania, the best of his campaign, maybe his career. Speaking from the site of Abraham Lincoln’s famous civil war address, he called for an end to divisive hateful rhetoric – implicitly criticising Trump for pitting “blue” against “red” states – and declared that he would work as hard for those who do not support him as those who do.

However compelling the speech was, Biden’s rhetoric reflected a gap in how opposition parties counter the strongmen politics of those now in power. Opposition leaders offer abstract conceptions of reconciliation and social justice and then jump to specific policy proposals. Biden’s speech looked to American historical events and the strength of the American “people” in times of adversity as proof Americans could now overcome the pandemic and economic crisis and come together after years of political strife.

Correspondingly, he argued that he, as a lifelong politician dedicated to consensus-building, was the right person to guide America in its journey to becoming more unified.

To succeed politically in the longer term Biden, and Starmer, need to fill the gap between abstract aspirations and concrete policy programmes. Trump understands this gap. He has succeeded politically because he has focused on protecting certain values and attitudes from criticism, telling supporters explicitly or implicitly that he shares their views. Because he allegedly understands how they perceive the world, they should trust him with policy decisions even if those decisions appear counter to their interests.

At the same time he has also failed politically. His fateful embrace of intolerance and greed has prevented effective responses to crises, whether unexpected such as the pandemic or long-standing such as racial injustice and climate change.

In fact, effective policy responses to the pandemic and mass protests against racism require respect for the common good, and asking the public to alter its own behaviour to care for others, including those from different backgrounds.

Opposition leaders can learn from both his success and his failure. Biden hinted at this in his speech with references to caring and hope, but these were minor mentions compared with the larger themes of repairing divisions in American society. To achieve a revitalised and unified America he and other political figures should be exalting the importance of co-operation, trust, generosity and respect in individual attitudes and behaviour.

If Trump wins next month then the opposition should fight for these alternative values.

If he does not then Biden has a chance to make these values more dominant, especially in fulfilling his promise to be the president of the states that most certainly will not vote for him next month.

A number of solid “red” states have the highest obesity, poverty, and heart disease-related death rates in the country, as well as the lowest education, median income and GDP growth rates. A few of these states, such as Mississippi, are also struggling with opioid addiction. Because of poverty and lack of economic growth, the states receive comparatively high levels of federal funding compared to wealthier “blue” states such as California.

Biden will not be able to be president of all of the US without prioritising the needs of the Trump voters, perhaps at the expense of the states that did vote for him.

In doing so he will illustrate for other Americans, and for others around the world resentful and anxious because of rising Covid-19 and joblessness rates, that the only path forward is to alleviate the suffering of those you oppose politically.

Shana Cohen is the director of Tasc, a think tank for action on social change