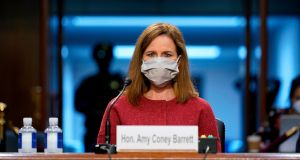 US supreme court nominee Amy Coney Barrett came under intense questioning from senators on Tuesday as she said that her personal choices had no bearing on her professional work.

Ms Barrett, who was nominated last month by president Donald Trump to replace the late justice Ruth Bader Ginsburg on the supreme court, was questioned about her views on gun rights, abortion and the Affordable Care Act, during the second day of her confirmation hearing.

“I’ve never tried in my personal life to impose my choices on [others] and the same is true professionally,” Ms Barrett told the senate judiciary committee. Her Catholic faith, she said, had been “caricatured” in the media. But she declined to answer substantively about her position on controversial issues that may come before her as a supreme court justice if she is confirmed.

Referring to the late justice Antonin Scalia, for whom she clerked in the 1990s, Ms Barrett said “his philosophy is mine, too”. But asked by California senator Dianne Feinstein if she shared Scalia’s view that Roe v Wade, the landmark supreme court ruling legalising abortion, was wrongly decided and should be overturned, she said she could not answer on cases that may come before her.

Ms Feinstein replied: “On something that is a major cause with major effects on over half of the population of this country who are women, it is distressing not to get a straight answer.”

Asked by committee chairman Lindsey Graham if she owned a gun – an oblique reference to gun rights cases she may have to consider on the bench – she replied “we do own a gun”. But she argued that it would not affect her ability to make an independent judgment on second amendment cases. “Judges cannot just wake up one day and say, ‘I have an agenda – I like guns, I hate guns, I like abortion, I hate abortion’, and walk in like a royal queen and impose their will on the world,” she said.

Ms Barrett, who has been a judge since 2017 when she was nominated by Mr Trump to the seventh circuit appeals court, was again accompanied by her husband, Jesse, some of her seven children and siblings in the senate hearing room in Washington DC.

Asked by Democratic senator Dick Durbin about the George Floyd killing this year, which prompted widespread protests over racial injustice, Ms Barrett replied: “Given that I have two black children, that was very, very personal for my family,” she said, adding that she and her 17 year-old daughter Vivian, who was adopted from Haiti, “wept together in my room”.

Former presidential hopeful Amy Klobuchar pointed out that the supreme court was the highest court in the land, where decisions “have a real impact on people”, from deciding what schools they can go to, who they can marry and whether they can access to contraception.

“This hearing is not normal. It is a sham, it is a rush to put in a justice,” she said. “The last time we had a vacancy so close to an election was when Abraham Lincoln was president and he made the wise decision to wait until after the election,” she said, noting that it was 21 days until the presidential election.

Asked if she believed it was “faithful to our democratic principles” to have a supreme court vote so close to an election, Ms Barrett replied: “I think that is a question for the political branches.”