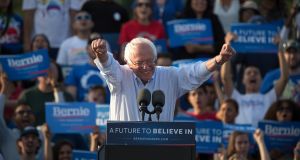 Bernie Sanders may have lost his bid to become the Democratic nominee for the White House, but party members don’t want the US senator from Vermont to step off the stage.

More than three-quarters of Democrats say Mr Sanders should have a “major role” in shaping the party’s positions, while nearly two thirds say Hillary Clinton - who beat him for the nomination - should pick him as her vice-presidential running mate, according to a Reuters/Ipsos poll.

In a sign that Democrats hope their party can unite after a fierce primary season, two-thirds also said that Mr Sanders should endorse Ms Clinton, a former secretary of state and senator who appears bound for a showdown with Republican Donald Trump in November’s presidential election.

Mr Sanders, a self-described Democratic socialist, managed to turn his long-shot run into a mass movement with hard-line proposals to combat wealth inequality, increase access to health care and education, and defend the environment.

His challenge to Ms Clinton, one of the best-known figures in American politics, lasted far longer than expected, as he racked up strong results in a number of state nominating contests and stayed in the race even when the delegate count seemed to spell his doom, and yielded record numbers of small donations to his campaign.

Mr Sanders so far has not conceded defeat, even though Ms Clinton recently clinched the nomination and won endorsements from president Barack Obama and US senator Elizabeth Warren of Massachusetts - a favorite of the same left-leaning voters who supported him.

Mr Sanders has said he will continue to push for a liberal agenda heading into the Democratic National Convention in July - when Ms Clinton’s nomination is expected to become official - though he has hinted he does not want his presence to hurt the Democrats’ chances of keeping the White House.

The poll, conducted June 7th-10th - right after Ms Clinton sewed up the delegate majority to become the presumptive Democratic nominee - showed that while most Democrats want Mr Sanders to line up behind Clinton, about 44 per cent would like him to make an independent run for the White House. Some 47 per cent said he should not.