US court rules in favour of gay marriage nationwide

Cheers erupt outside the Supreme Court after justices rule that the U.S. Constitution gives same-sex couples the right to marry. Video: Reuters 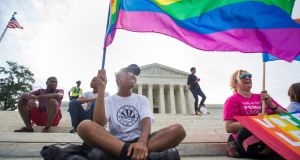 Supporters of gay marriage outside the Supreme Court before the decision. Photograph: Jim Lo Scalzo/EPA

The Supreme Court has ruled that the US Constitution provides same-sex couples the right to marry, handing a historic triumph to the American gay rights movement.

The court ruled 5-4 that the Constitution’s guarantees of due process and equal protection under the law mean that states cannot ban same-sex marriages. With the landmark ruling, gay marriage becomes legal in all 50 states.

Immediately after the decision, same-sex couples in many of states where gay marriage had been banned headed to county clerks’s offices for marriage licenses as state officials issued statements saying they would respect the ruling.

President Barack Obama, appearing in the White House Rose Garden, hailed the ruling as a milestone in American justice that arrived “like a thunderbolt.“

“This ruling is a victory for America,”said Obama, the first sitting president to support gay marriage. “This decision affirms what millions of Americans already believe in their hearts. When all Americans are treated as equal, we are all more free.“

Justice Anthony Kennedy, writing on behalf of the court, said the hope of gay people intending to marry “is not to be condemned to live in loneliness, excluded from one of civilization’s oldest institutions. They ask for equal dignity in the eyes of the law. The Constitution grants them that right.”

Mr Kennedy, a conservative who often casts the deciding vote in close cases, was joined in the majority by the court’s four liberal justices.

Kennedy, appointed by Republican President Ronald Reagan in 1988, has now authored all four of the court’s major gay rights rulings, with the first coming in 1996. As with his 2013 opinion when the court struck down a federal law that denied benefits to same-sex couples, Mr Kennedy stressed the dignity of marriage.

“Without the recognition, stability and predictability marriage offers, their children suffer the stigma of knowing their families are somehow lesser,” Mr Kennedy wrote.

In a blistering dissenting opinion, conservative Justice Antonin Scalia said the decision shows the court is a “threat to American democracy.”

The ruling “says that my ruler and the ruler of 320 million Americans coast-to-coast is a majority of the nine lawyers on the Supreme Court,” Mr Scalia added.

Conservative Chief Justice John Roberts read a summary of his dissent from the bench, the first time he has done so in his 10 years on the court.

Mr Roberts said although there are strong policy arguments in same-sex marriage, it was not the court’s role to force states to change their marriage laws.

“Five lawyers have closed the debate and enacted their own vision of marriage as a matter of constitutional law,” Mr Roberts wrote.

The dissenters raised concerns about the impact of the case on people opposed to same-sex marriage on religious grounds.

“Hard questions arise when people of faith exercise religion in ways that may be seen to conflict with the new right to same-sex marriage,”Mr Roberts said. He gave as an example a religious college that provides married student housing only to opposite-sex couples.

The ruling is the Supreme Court’s most important expansion of marriage rights in the United States since its landmark 1967 ruling in the case Loving v. Virginia that struck down state laws barring interracial marriages.

There were 13 state bans in place, while another state, Alabama, had contested a court ruling that lifted the ban there.

The ruling is the latest milestone in the gay rights movement in recent years. In 2010, Obama signed a law allowing gays to serve openly in the US military. In 2013, the high court ruled unconstitutional a 1996 US law that declared for the purposes of federal benefits marriage was defined as between one man and one woman.

Reaction came swiftly. James Obergefell, the lead plaintiff in the case, told a cheering crowd outside the Supreme Court, “Today’s ruling from the Supreme Court affirms what millions across this country already know to be true in our hearts - our love is equal, that the four words etched onto the front of the Supreme Court - equal justice under law - apply to us, too.”

Hundreds of gay rights supporters celebrated outside the courthouse with whoops and cries of “U-S-A!”and “Love is love”as the decision came down.

Opponents say same-sex marriage legality should be decided by states, not judges. Some opponents argue it is an affront to traditional marriage between a man and a woman and that the Bible condemns homosexuality.

Hillary Clinton, the front-runner for the 2016 Democratic presidential nomination, wrote on Twitter she was “proud to celebrate a historic victory for marriage equality.”

The ruling is the latest milestone in the gay rights movement in recent years. In 2010, Obama signed a law allowing gays to serve openly in the US military. In 2013, the high court ruled unconstitutional a 1996 US law that declared for the purposes of federal benefits marriage was defined as between one man and one woman.

Last month, Irish voters backed same-sex marriage by a landslide in the May 22nd referendum.

Same-sex marriage is also legal in several other western European countries including Britain, France and Spain. It is also legal in South Africa, Brazil and Canada. However, homosexuality remains taboo and often illegal in many parts of Africa and Asia.

Big business had urged the justices to support gay marriage, saying in a brief submitted in the case that inconsistent state laws impose burdens on companies and that marriage bans can conflict with corporate anti-discrimination and diversity policies.