Trump to name US supreme court justice successor by Saturday 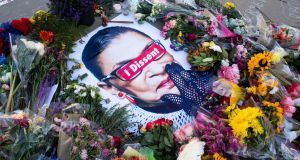 Flowers, candles and messages encircle an image of the late US justice Ruth Bader Ginsburg. It is understood her dying wish was that her successor be appointed after the election. Photograph: Michael Reynolds

US president Donald Trump will name a successor to the late supreme court justice Ruth Bader Ginsburg by the end of the week.

In a phone-in interview with breakfast TV show Fox and Friends on Monday, Mr Trump said he was considering five possible nominees, most of whom are “pretty young”. He has already said he will choose a female candidate.

“You like to go young cause they’re there for a long time . . . You can have someone on the bench for 40 or 50 years. These are big decisions,” he said.

A decision on Ms Ginsburg’s successor will be made on Friday or Saturday, the president said, after memorial services for the late justice have taken place.

Ms Ginsburg, who died on Friday, will lie in repose at the supreme court on Wednesday and Thursday and lie in state at the US Capitol on Friday, before a private burial in Arlington National Ceremony.

A political row over the vacancy looked set to dominate the final six weeks of the US presidential campaign but Mr Trump said he would prefer a new supreme court nominee to be approved before the November 3rd election.

“The bottom line is we won the election. We have the obligation to do what’s right and act as quickly as possible,” he said.

As the Senate reconvened in Washington on Monday, Republican Senate leader Mitch McConnell paid tribute to Ms Ginsburg as proceedings opened on the Senate floor.

“The legal world is mourning a giant,” he said.

But he quickly moved to clarify that he would proceed with a vote on Mr Trump’s nomination this year, despite blocking president Barack Obama’s nomination for the court in 2016, citing concerns it was an election year.

“President Trump’s nominee for this vacancy will receive a vote on the floor of the Senate. Already some of the same individuals who tried every single conceivable dirty trick to obstruct Justice Gorsuch and Justice Kavanaugh are lining up,” he said.

“The American people are about to witness an astonishing parade,” he said, predicting “a more appalling sequel” to the Brett Kavanaugh hearings, during which the supreme court nominee was probed over sexual assault allegations.

He said there was “more than sufficient time to process a nomination”, noting that 104 days remained before the end of the current Congress. The late John Paul Stevens was confirmed 19 days after he was formally nominated, he said.

“Eight times in our nation’s history new vacancies have arisen and presidents have made nominations all during the election year,” he said (seven of the eight were confirmed). “The historic precedent is overwhelming and it runs in only one direction.”

However, Mr McConnell refused to clarify if he would hold a vote before the November 3rd election or during the so-called “lame-duck” session between the election and the convening of the next Congress in January.

Among the nominees under consideration by Mr Trump for the vacancy are Indiana-based Amy Coney Barrett and Barbara Lagoa, the first Hispanic woman appointed to the Florida supreme court.

Michigan federal appeals court judge Joan Larsen is also believed to be among the contenders after Mr Trump said he was considering a woman from the state for the position.

Ms Ginsburg’s dying wish, as recounted to NPR radio, was that her successor should be appointed after the election. Mr Trump , who was due to campaign in Ohio on Monday night, suggested this was fabricated.

“I don’t know that she said that, or was that written out by Adam Schiff and [Chuck] Schumer and [Nancy] Pelosi?” he said, referring to three leading Democrats in Congress.

“It sounds so beautiful, but that sounds like a Schumer deal, or maybe a Pelosi or Shifty Schiff.”

Ginsburg's death gives Trump and his party an opportunity to establish a 6-3 conservative majority on a court whose decisions influence many spheres of American life including abortion, healthcare, gun rights, voting access, presidential powers and the death penalty