Iraq in crosswires as it seeks withdrawal of foreign forces 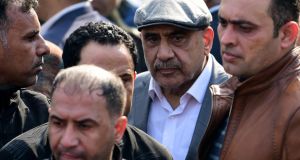 The US assassination in Iraq of Iran’s Quds Force commander Qassem Suleimani has ratcheted up tensions in a roiled region and torpedoed an effort to mediate between Iran and Saudi Arabia that could have reduced risks of war.

Iraqi prime minister Adel Abdul Mahdi has called Suleimani’s killing a “political assassination” and revealed he had arrived in Baghdad to deliver the Iranian reply to a Saudi proposal to end their rivalries in Iraq and the region. He also said US president Donald Trump had asked him to defuse tensions with Iran.

Fearing Iraq could become the main battleground between Iran – which has vowed vengeance, and the US, which has threatened devastating retaliation to any attack by Iran – the Iraqi parliament has adopted a non-binding resolution calling for the withdrawal of all foreign forces from Iraq.

Although the measure is non-binding and was passed by the Shia majority in the absence of Sunnis and Kurds, it exerts pressure for the cancellation of the 2014 request for US help in the campaign against the Islamic State terror group.

This course of action is favoured by Abdul Mahdi, who is operating in a caretaker capacity since his resignation in November in response to street protests. “Despite the internal and external difficulties that we might face, it remains best for Iraq on principle and practically,” he said.

Trump responded by threatening to clamp punitive sanctions on Iraq and demand $1 billion in compensation for investment in al-Balad airbase, where US forces are stationed. Having previously called for a US pullout, he has changed his mind and seeks to keep 5,200 troops in Iraq with the aim of countering Iranian influence there and in the region.

Since Trump’s stand violates the deployment agreement, which limited the US role to the fight against Islamic State, Iraqis see this as reoccupation.

In response to Trump’s hard line, Iraqis have two options: demonstrate or attack. If Abdul Mahdi fails to act or stalls, thousands who have protested against government mismanagement and corruption since October could return to the streets to boost pressure for an end to both the US deployment and the US- imposed sectarian regime, which empowered pro-Iranian Shia fundamentalists.

Iraqi nationalist cleric Muqtada al-Sadr reactivated his militias to “protect Iraq” and has called for closing the US embassy, cutting contacts with the US and expelling US troops. His Mahdi army fought the US occupation from 2003 to 2008, when Suleimani negotiated a ceasefire.

Vengeful pro-Iran Shia militias could also mount independent attacks on US targets in Iraq and elsewhere, risking heavy US retaliation against Iran.

Trump has threatened to strike 52 locations in Iran, including some of the country’s 24 Unesco world heritage sites, thereby committing war crimes. Iraqis, Syrians and other Arabs are particularly sensitive to attacks on historic and cultural sites as US occupation forces damaged Babylon and failed to protect Baghdad’s museums from looters .

Islamic State destroyed Islamic and ancient sites in both Iraq and Syria. Arab archaeologists see Trump as a modern Hulagu, the 13th-century Mongol warrior who laid waste to the region.

Saudi Arabia, the Emirates and Kuwait have called for restraint and de-escalation but they have little purchase on the key actors.