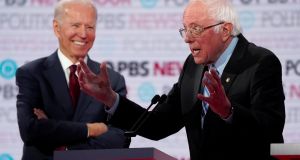 The leading Democrats vying to take on Donald Trump in November’s US presidential election are set to spar over who would make the best commander-in-chief on Tuesday, in the first televised debate since Trump ordered the killing of Iranian general Qassem Suleimani.

As he struggles to cement his frontrunner status, former vice-president Joe Biden has sought to position himself as the candidate with the most foreign policy experience, and the safest pair of hands to take over at a perilous time. But rival Bernie Sanders, the socialist senator from Vermont, has sought to make Biden’s long CV a liability.

With three weeks to go until the Iowa caucuses, the first polling event of the presidential primary calendar, public opinion polls show four of the candidates – senator Elizabeth Warren and former Indiana mayor Pete Buttigieg along with Biden and Sanders – in a virtual dead heat in the state.

On Friday, Biden’s campaign released a new television ad in Iowa featuring recent news clips from Iran alongside older photos of the former vice-president in the White House situation room and speaking at the UN.

“We live in the most dangerous moment in a generation, our world set on edge,” a narrator says in the ad. “This is a moment that requires strong, steady, stable leadership. We need someone tested and trusted around the world.”

The ad echoed a speech the 77-year-old former vice-president made last week in New York, where he said Trump’s recent decisions had proven “beyond dispute” that the president was “dangerously incompetent and incapable . . . of world leadership”.

Trump has been criticised by both Democrats and Republicans for his decision to kill Suleimani, and for taking action without consulting Congress. Iran responded to the general’s killing last week by launching ballistic missiles at US forces in Iraq.

Political analysts say while American voters tend to vote on domestic rather than foreign policy issues, the Iraq war proved decisive in the 2008 Democratic presidential primary contest. Barack Obama, who started the race as an underdog, won his party’s nomination in part because he had opposed the war in Iraq, while his main rival and the odds-on favourite, Hillary Clinton, had voted in favour of it.

With that in mind, Sanders has blasted the former vice-president for his 2002 vote in favour of the Iraq war. The 78-year-old senator, who voted against the war, said in an interview with CNN last week: “Joe Biden voted and helped lead the effort for the war in Iraq, the most dangerous foreign policy blunder in the modern history in this country.”

At the weekend, John Kerry, the former secretary of state who is campaigning for Biden, defended the former vice-president and shifted the blame to George W Bush’s administration, who he said “broke their word” on Iraq.

“It is appalling that after 18 years Joe Biden still refuses to admit he was dead wrong on the Iraq war,” said Jeff Weaver, a senior adviser to the Sanders campaign. “Bernie Sanders saw the same information and had the judgment to vote against the Iraq war. That’s the kind of commander-in-chief we need – someone with the toughness and judgment to get those calls right.”

Mary Anne Marsh, a Democratic strategist, said that Sanders was “picking a fight with Biden now for when he meets him later”, because while military issues may not prove decisive in Iowa or next-to-vote New Hampshire, Sanders’s anti-war message could resonate in subsequent early voting states of Nevada and South Carolina.

In those states, polling shows Biden currently has an advantage, but many voters, especially in black or Hispanic communities, have ties to the military and are keen to end “endless wars”.

As for Iowa, a Des Moines Register/CNN poll published on Friday showed Sanders in the lead, with the support of 20 per cent of likely caucus-goers, followed by Warren at 17 per cent, Buttigieg at 16 per cent and Biden at 15 per cent.

In New Hampshire, where the second primary contest will take place on February 11th, Sanders is also on top, according to an average calculated by Real Clear Politics, with Biden in second and Buttigieg in third. Despite being the youngest candidate, Buttigieg (37) is the only presidential hopeful who will be on stage on Tuesday to have military experience, having completed a seven-month tour of Afghanistan with the US Navy Reserve in 2014.

Charlie Cook, the publisher of the non-partisan Cook Political Report, pointed out that Sanders is also vulnerable over the Iraq war and the current crisis in Iran. Biden and Buttigieg are explicitly appealing to centrists, who view the socialist senator as weak on foreign policy and, as Cook put it, have “no confidence in [his] ability to deal with national security issues”.

The most recent Des Moines Register poll showed that even among his own supporters in Iowa, only 61 per cent said Sanders’s ability to lead the military was a strength, while 23 per cent said it was a weakness. – Copyright The Financial Times Limited 2020

2:42 Case for removing Trump set out on day two of Senate trial